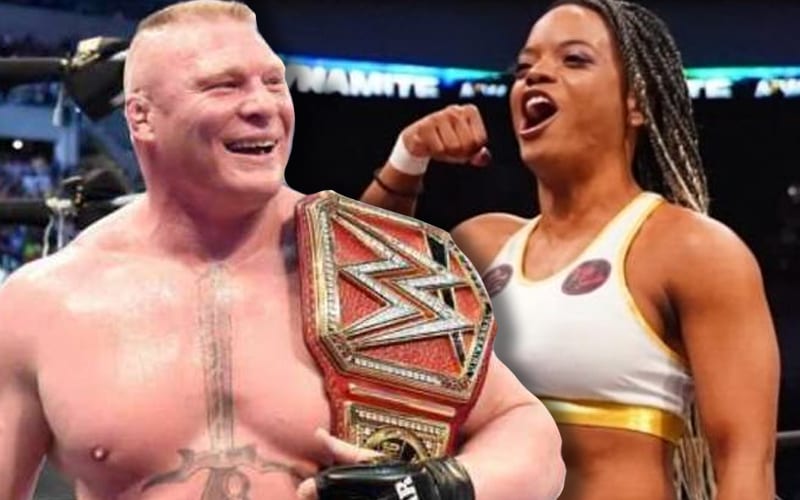 Big Swole has been around WWE before. Swole is also comfortable wherever she goes. This gives her plenty of opportunities to show off her personality.

During AEW Unrestricted (Transcription by Ringside News), Big Swole told one backstage story that we didn’t see coming. She was backstage at a WWE event and saw how Brock Lesnar was being annoyed by so many people. This is when she decided to cheer up the Beast Incarnate by telling him that she could whoop his ass.

Brock Lesnar seemed to enjoy the change of pace from Big Swole. She was wrestling at the time as Ariel Monroe. She certainly made an impression on Brock Lesnar.

“The whole entire day I’m just clowning with people like people that I know and things like that. I see Brock Lesnar and every time he walks past — all the extras are like ‘Hell sir, hello sir, hello sir.’ Acting like they’ve got wedgies just acting all stuck up and stuff. I’m like ‘he’s just a regular person stop bothering this man.’ So the last person bothers him and they’re like, ‘thank you so much da-da-da-da-da-da,’ I walk over to him and go, ‘Hey, Brock, right?’ He’s like, ‘Yeah.’ I was like, ‘I just want to let you know that I could whoop your ass.'”

“The fact that I had the balls to say that — because I was like, ‘I’m gonna make him laugh’ because obviously he was just so pissed off with people stopping him 24/7 and he’s like. ‘That’s funny, what’s your name?’ I said ‘I’m Ariel,’ he’s like, ‘Okay, I’ll remember that and you can whoop my ass again,’ I was like, ‘I could whoop your ass,’ — ‘Okay, okay,’ and he walks off.”

Everyone has their own sense of humor. Brock Lesnar isn’t regarded as someone that has a lot of fun, but there are stories to prove the opposite. Corey Graves told a great story about how Brock Lesnar paid for a hotel bar to stay open late for Superstars during a snowstorm.

Big Swole got away with telling Brock Lesnar that she can whoop his ass. It’s not guaranteed that everyone would get the same result.