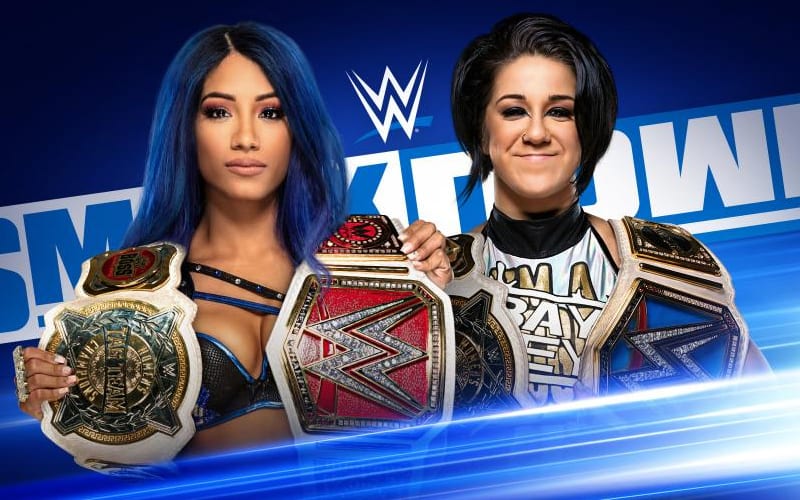 WWE Friday Night SmackDown this week officially kicks off the road to SummerSlam for the blue brand. This will be an interesting episode and they have a few special things in store.

The bar fight between Jeff Hardy and Sheamus was planned for Extreme Rules. This was officially on the line-up, but they were waiting to confirm it due to Sheamus being out of action for unknown reasons. Sheamus was still able to film segments from home where he continued the feud. That bar fight will finally go down this week.

Naomi will be a special guest on Miz TV this week. Let’s see what happens when The A-Lister and Johnny Drip Drip meet The Glow.

Sasha Banks and Bayley will also have a lot to say about their claim to all the titles in WWE. The Golden Role Models will be on SmackDown because they’re on every main roster television show now as Women’s Tag Team Champions.

The show started with short promos from Jeff Hardy and Sheamus. Hardy admited to being an alcoholic and said he’s facing Sheamus in such a dangerous place for him: a bar. Sheamus cut a small promo on Hardy too.

JBL spoke a little bit about the bar fight. He was via webcam. Jeeves was then shown behind Sheamus’ bar cleaning a glass.

They showed display on the screen showing that they are the new definition of greatness. Nikki Cross and Bliss came out next and Nikki said she wants another shot at Bayley’s title now.

Bayley set up a match a match against Alexa Bliss instead. Nikki said “we have to do it.” Then she pushed Bliss down and went to the ring. The winner of the match will get to face Bayley next week.

The two partners wrestled while Banks and Bayley trash talked them from commentary.

Nikki fired up against Bliss as Bayley loved the action in the ring. Cross tried to do her spot by trapping Bliss in the apron and Alexa fired back. The Bliss and Cross take Banks and Bayley down with dual shots.

Bliss and Cross continued past the commercial. Nikki’s ribs were taped and Cole called attention to it.

Bliss took to Cross’ ribs as they carried on until the ended up fighting on top. Bliss shoved cross of and they got back to their feet. Then Cross hit a neckbreaker for a near fall.

Nikki then hit her finisher for another two count. Cross missed a cross body and she was selling her ribs. The referee checked on her and then she caught Bliss in a roll-up and won.

They showed Nikki Cross backstage and Alexa Bliss handed her a bottle of water. Bliss congratulated Cross and they hugged.

They showed a highlight from the Swamp Fight from Extreme Rules. They showed the part with Alexa Bliss and how it ended.

Bray showed up in the Fun House. He said that Braun is back home. Then Wyatt said it’s okay that Braun is stuck in the swamp because it is 100% certified organic. Then Bray started talking to his head lantern like it wanted out. Wyatt said: “not, you had your chance, it’s his turn now. He has been unleashed.”

Riddle hit some knees, but Nese kicked out at two after a cover. Nese snapped Riddle’s neck over the top rope and hit a springboard moonsault for a two count.

Then Nese got Riddle down with a submission hold. He stretched at Riddle and then Riddle got up with Nese still holding on. Riddle tried a Bro Derek, but Nese kneed his way out of it.

Riddle hit a running forearm and threw Nese across the ring. Riddle kicked Nese and then hit a Bro Derek for the win.

Riddle got on the microphone. He said he’s kinda new here, but he’s going to give this a try. Then he called out King Corbin. The King came out and said Riddle can’t just call him out. If he wants audience with a king then he wants a formal request. Corbin said that Riddle has a little bit of talent and a “new car smell,” but he doesn’t belong in SmackDown. He told him to go back NXT, or go to 205 Live because he’ll be a top guy there. Then Corbin put out a King’s Ransom for anyone who can prove that Riddle doesn’t belong in his kingdom. Then Riddle said that Corbin is the next special guest on the Bro Show. He then turned around the kicked Nese again.

They introduced her before talking about trends. She talked about last week’s loss and how #NaomiDeservesBetter trended on Twitter. She said it’s crazy to have that kind of support. It’s not easy to push herself in the ring, but she kept doing it.

They brought up how she went viral and how it doesn’t make any sense because she lost. Naomi said that they’re making her sick. They asked “how sick?” Then they gave themselves “five Seth Rollins’ pukes.”

Naomi said that she wasn’t trying to trend. Then she asked Miz what makes him think that he can dig at her and her fans. She said that’s why fans are behind her and want more for her. She got confrontational and Johnny Drip Drip said it’s about to get worse. Then Miz introduced Lacey Evans.

Lacey asked them if they’ve ever had their ass kicked so bad they became a hashtag. She said Naomi is washed up, and then she started to put on lipstick, but Naomi pushed her and it got lipstick all over her face. Lacey left all mad about her messed-up makeup.

Kofi Kingston was backstage and he said medical said he needed to be out of action for six weeks. Kofi said it’s Big E’s time.

The winner of this match will get a future IC Title shot.

They had an equally balanced match through the commercial. Shorty and Drew ganged up on Metalik, but Dorado saved him. Then Shorty and Gulak wrestled a bit as they tried to outmatch each other. Shorty fired some forearms off on Metalik and the Gulak wanted to get involved.

Shorty threw both Lucha House Party members into the corner and hit an exploder suplex to Gulak and then G hit another suplex for a two count. Suddenly, G got stuck in a Gu-Lock, but he got out of it and slapped on an ankle lock.

Dorado hit a splash on G from the top for a two count. Then Lince Dorado hit two moonsaults and went for a third, but Gulak caught him and then G got under Gulak and put him on his shoulders before G sent Gulak outside. Metalik hit an elbow off the ropes and got the win.

Otis & Mandy Rose will be on the show next week.

Cesaro and Shinsuke Nakamura cut a promo backstage about being SmackDown Tag Team Champions. They were happy about taking out Kofi.

Sheamus came in first looking very ready for a fight with suspenders on. Sheamus took a shot and Jeff showed up. Hardy took a glass and told the referee that he’s just there for the three count.

Jeff said his brother had to delete his WWE career, but he’s here to recover it. Then Sheamus said Jeff is weak and pathetic and nobody cares about him. Jeff asked Sheamus if he’s still the bar. He is.

Then Jeff Hardy tossed his beer in Sheamus face and they started brawling. Sheamus took control and slammed Hardy onto the bar. Then he dragged Hardy down the bar and knocked everything off of it. he beat Jeff up even more with clubbing blows to his exposed red chest.

Sheamus ordered a shot and Jeff hit a dive off the bar. Then they brawled down a hallway and Sheamus finally took advantage to drive Hardy off the walls and then he slammed a door on him several times.

They moved to the bathroom and Sheamus stuck Hardy’s face in a urinal and flushed it. Hardy fought Sheamus off and scampered down the hallway to get away. Then Sheamus came after him and started a hunt.

Sheamus took a shot from a ladder as Hardy found some hardware as Sheamus’ back was turned. Then Hardy went back on the bar and tried to splash Sheamus again, but he was caught.

We came back from commercial and Jeff was still in the middle of a broken down drum kit. Sheamus took a bump and Hardy jumped on top of him. Then Jeff dragged Sheamus over to the bar, but Sheamus reversed him.

Hardy hit a Twist Of Fate and set up the ladder. Then he put Sheamus in position and climbed up on top of the ladder. The bartender Jeeves tried to attack Hardy, but Jeff took him out with a powerbomb through a table.

Sheamus then destroyed a chair over Hardy, but his hat on Hardy’s face, and got behind the bar. Sheamus took a sip of beer that was already poured. Then he suddenly downed the whole thing. He limped back over to Jeff and then Hardy’s face was suddenly painted.

Hardy took Sheamus down and then climbed up where he hit a Swanton off the ladder on the concrete floor, but there was a bounce to it, so you know there was a crash pad for the stunt.