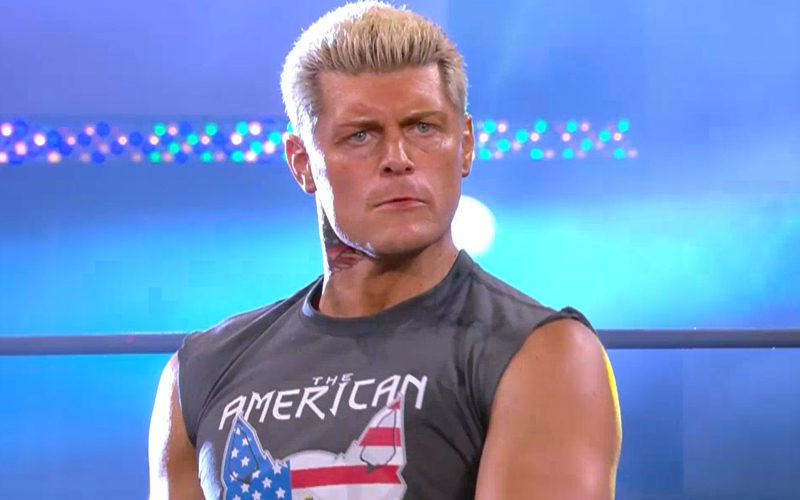 Cody Rhodes has quite a personality, especially in the locker room. Stu Bennett calls Cody a liar in the best way possible. This proclivity to stretch the truth actually ended up paying off for the former Wade Barrett.

While speaking to Chris Van Vliet, Stu Bennett explained how Cody Rhodes invented the Bad News Barrett persona. Cody would tell people in the locker room that he remembered watching Bennett when he was a young nightmare, but his gimmick was “Bad News Barrett.” Cody also invented Bad News’ trademark catchphrases as part of this lie.

The bit ended up making its way on the the JBL and Cole Show and Vince McMahon eventually caught a glimpse of the gimmick. He obviously loved it and Bad News Barrett became a reality out of a total fabrication from the American Nightmare.

“That started on something called ‘The JBL and Cole Show’, which was JBL, Michael Cole, Cody and a couple of other people who had been doing this quirky Internet show for a while. Cody, notorious liar in the locker room, and I say that with all respect because he’s not mean about it, but he likes to tell bullsh*t stories about people.

“One day, I walked into the locker room, and he was telling all the guys in the locker room that when was a kid, he used to watch me wrestling. I was wrestling as a character called ‘Bad News Barrett’ who would walk into the ring and say, ‘hey guys, I got some bad news. The show’s cancelled.’ That was Cody’s running joke.”

After the JBL And Cole Show aired, Wade Barrett was in need of a new gimmick and Vince McMahon liked the character. They soon approached him about making the gimmick happen for real. It all came together perfectly as if Cody were fantasy booking Barrett in a role he saw him in instead.

“When they approached me saying, ‘do you want to be a part of it? Cody’s in it.’ I was like, ‘yeah, you know what? Make me Bad News Barrett. I just come in. Bad news. That became a character for a little while. It turned out Vince was shown this by JBL. He liked the character. He thought it was really funny, and he decided then to put me on the main roster.

“I said immediately this isn’t going to work. It works in this quirky world of JBL and Cole Show which is kind of a bit hocus pocus and a bit of pantomime. I don’t think this is going to work in the real world, but he said, ‘no, just give it a shot. Just do promos,’ and I’d say for the first three or four weeks when I was doing the promos, it was a bit flat and fans didn’t know what to make of it, but then slowly but surely they became accustomed to the cadence of the speeches and [knew] what was coming. There was also that anticipatory moment when they got to chant along with the catchphrase, get the zinger at the end and I disappear.”

Cody Rhodes can now have his own ideas for characters and his opinions are taken with much more gravity. It’s interesting to know that Wade Barrett’s arguably most popular run in WWE was due to a locker room joke from Cody.

Wade Barrett also made a ton of royalty money off those “I’ve Got Bad News For You” t-shirts. So, he probably has Cody to thank for that as well.