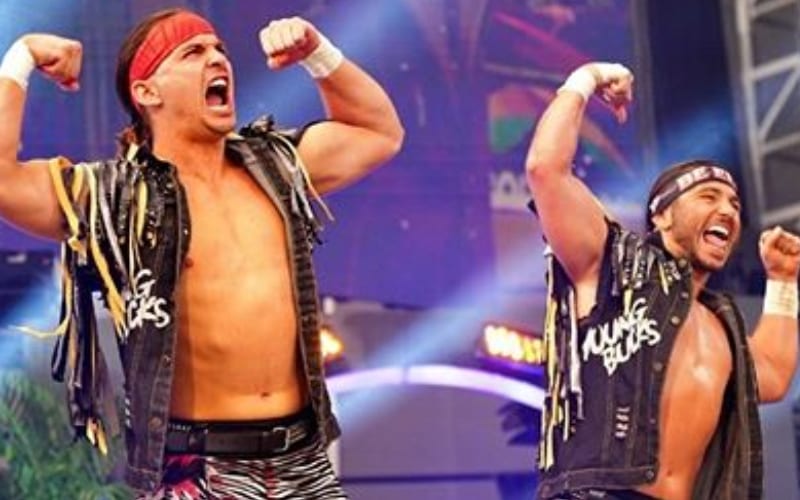 AEW Dynamite brought an action-packed show to TNT this week. One highlight saw the Young Bucks battle The Butcher and The Blade in a falls count anywhere match. That match saw them battle all over Daily’s Place and end things on the stage with a very risk dual dive from the Young Bucks.

During Wrestling Observer Radio (transcription by Ringside News), Dave Meltzer explained that the final spot of the match actually saw several stars “messed up.” Hopefully, there are no long-term injuries.

“Matt does a stage dive, but it’s an elbow on The Butcher, and when he did the elbow when he put The Butcher through the table the table leg jammed his knee so he was pretty messed up.”

“Nick did the swanton off the top of the stage — like these were really tall dives they climbed up the lighting tower on the stage. It was like a CMLL dive and [Nick] was pretty shaken up from that swanton dive too. Aside from The Butcher, I don’t know, but the other three guys were pretty messed up.”

The Young Bucks made a name for themselves thanks to the spots they did in the ring. This particular dive took place outside of the ring, but it was still plenty dangerous. The high spot ended the match this week on Dynamite, but we also have to wonder how much it took out of everyone involved.

Pro wrestling isn’t ballet and that kind of risk is going to be a part of the situation. This week’s episode of AEW Dynamite certainly included a spot where the Young Bucks tested fate once again.