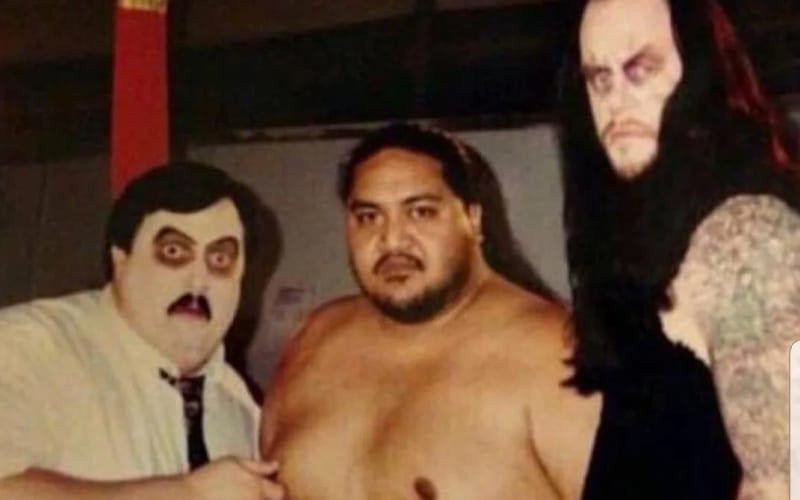 The Undertaker had his own little backstage gang in WWE called the Bone Street Krew. The group consisted of legends like Paul Bearer, Yokozuna, The Godfather, Savio Vega, The Godwins and many others.

On a bonus episode of Undertaker: The Last Ride, Taker told some tales of the Bone Street Krew’s time on the road together. One of the incidents he recalled was destroying a hotel room while fighting with WWE Hall of Famer The Godfather over a hat.

Taker then went on to talk about the time when he and the rest of the Krew were playing cards in a hotel room in Kuwait. The Phenom decided to pull out a few matches and lit them on fire and threw them at his friends for fun. They didn’t have any “adult beverages,” so he had to find something to pass the time.

The Deadman lit up a match stick and threw it over Yokozuna’s head. What he didn’t realize was that the stick fell on the Hall of Famer’s hair and set them on fire.

The Krew members decided to put off the fire by taking free shots at the big man, who didn’t complain about it and laughed it off in good spirits.

All the BSK boys, that core group of guys, we were always together. Yokozuna, he was always in a good mood and always wanted to play cards or dominos. We were in Kuwait together. No, they don’t have adult beverages over there. We were in my room playing cards and we were all getting a bit stir crazy.

I remember taking a match and I’m setting them on fire and flicking the matches and trying to hit people with them. Big Yoko was on the other side of the table from me, and I flicked one, and it went right over his head. I didn’t realize it landed in the back of his hair. All-of-a-sudden, I start seeing all this smoke. I said, hey Rod, turn around.’ He turns around and sure enough, his hair is on fire. And then, it was like, five guys pounding him to death to try to put the fire out, but it didn’t work getting some free shots on him. He laughed it off. Just a great dude, man. I really miss him.”

The Undertaker has always talked fondly about his late friend and WWE Hall of Famer Yokozuna. The legendary big man was universally loved backstage by his peers, underlings and superiors.

Thanks to Wrestling Inc for the quotes.