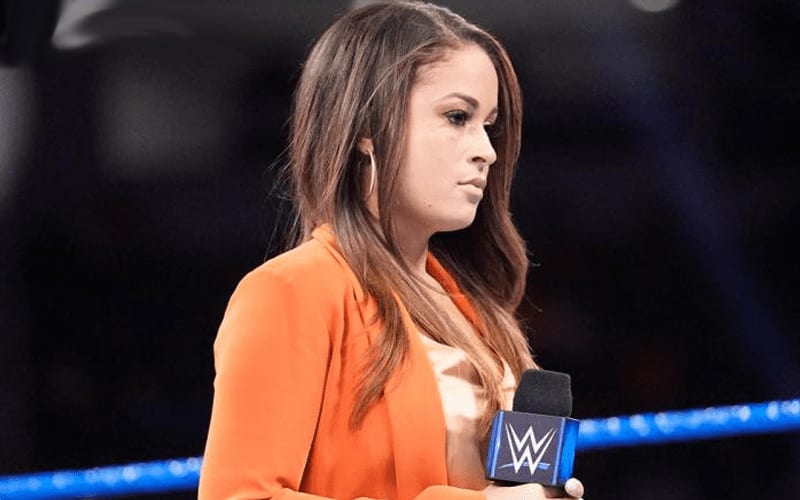 Kayla Braxton returned to Friday Night SmackDown this week. She tested positive for COVID-19 a second time a few weeks ago, but now she’s cleared once again. This was a concerning situation, but Braxton is thankfully okay. Some fans were still rather rude about it.

Braxton jumped on Twitter this morning to address some of the hurtful things that fans were saying to her. A couple of them even said that they thought she died and “maybe that would be for the best.” It’s not okay to say that to people and Braxton wanted to make that clear.

She thanked her supporters, but Kayla Braxton wanted to pay special attention to those who were mean to her over a health issue.

I tested positive for COVID late March. I notified my company and I left and self quarantined for 4 weeks. Then I was retested and tested negative. I still wore a mask and took all necessary precautions but then once again, I tested positive a couple months later. This time I had no symptoms but still, I left work and self quarantined for 14 days. Last night you all were tweeting super insensitive things regarding my health. A couple of you even said you thought I had died and maybe that woulda been for the best. Guys. This isn’t okay. When I said don’t be stupid like me I meant don’t make the mistake of thinking you can’t test positive twice. I did everything I could, and this can happen to you. Moral of the story is: stop bullying people online, especially for something that concerns health. It’s so gross and you should be embarrassed. Let’s all be better. This is a hard time for everyone and we’re all experiencing a state of the world we’ve never experienced before. Build each other up. Help people. Just be good to people. And to all of you who have lent your support I’ve seen you and I thank you. We need more people like you.

Some people were confused as to how she got COVID-19 a second time. She was wearing a mask and protecting herself. She also came down with the virus twice which was a big wake-up call for her. Thankfully, she’s doing much better but that won’t stop some people from posting horrible things online.