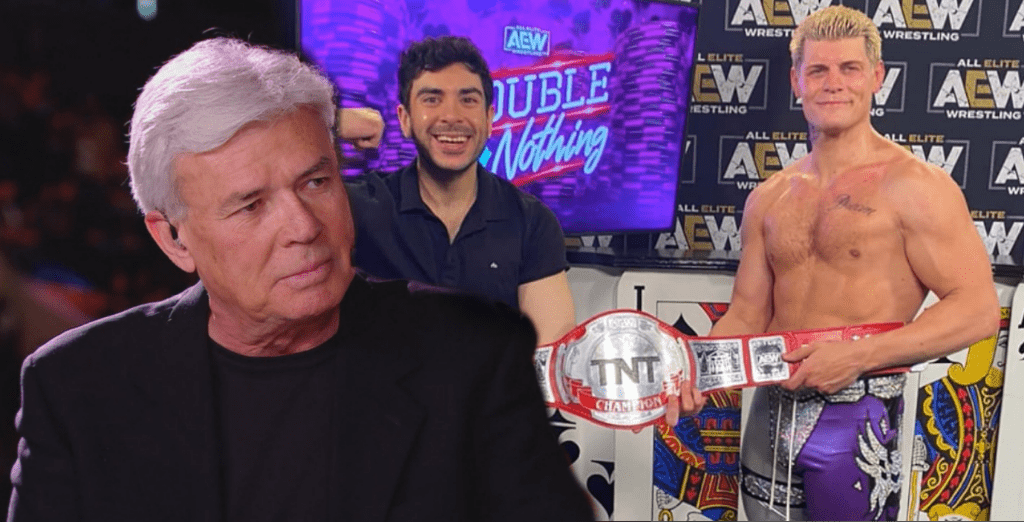 AEW is WCW successor on TNT and many even see the company slowly becoming a legitimate alternative to WWE.

Tony Khan, the president of AEW and Eric Bischoff, the man incharge of WCW, talked candidly with each other on the Fight For The Fallen YouTube preview. The two men talked about a number of things and Khan even told Bischoff that AEW wouldn’t exist without him & WCW.

During the session, Tony Khan asked Eric Bischoff about his thoughts on the TNT Championship. Bischoff said that what AEW is doing with the title makes a “ton of sense”.

If that was the intent, instead of doing a TV title which really hasn’t mean a lot over the decades and to try to reinvent that title and brand or co-brand with your Television partner makes a ton of sense.

You know my only one reservation, just to be perfectly honest, if we were privately talking I would answer this the same way, is you know, sometimes too many belts can get confusing for the audience and you start losing track of the what’s most important or where the priorities are in terms of belts and things like that. But, aside from that, I think if you are going to do it and branding yourself with your television partner’s a damn smart idea for a lot of reasons.

Tony Khan thanked Bischoff for his thoughts and went on to reveal that he had to convince TNT to agree to the idea and got through once they realised it’s potential.

Cody Rhodes is the current TNT Champion and as of late, his championship matches against up and coming Superstars have been one of the highlights of AEW as a whole.

You can watch the full Fight For The Fallen preview here: