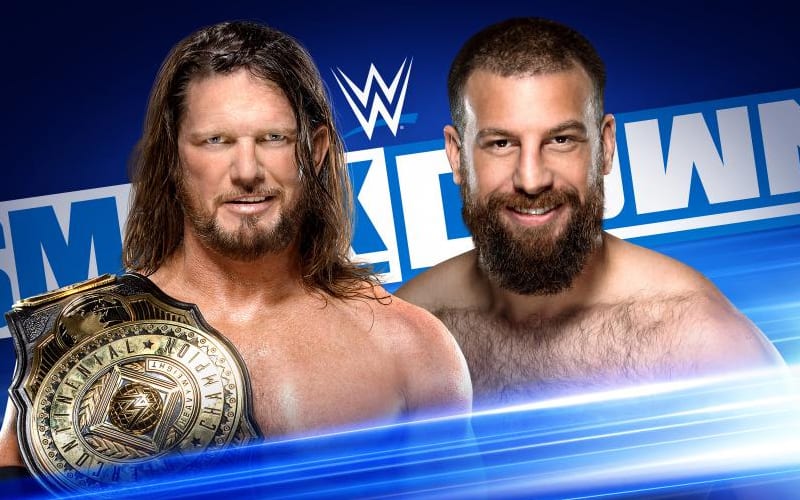 This week’s WWE Friday Night SmackDown will be an interesting show for July 3rd. WWE needs to make some moves toward Extreme Rules if they want to fill out the card.

Matt Riddle will be in the ring this week, but he will be interviewed by Michael Cole. The Original Bro will get his chance to speak and odds are he’ll have a rival approach him.

Also, AJ Styles puts the IC Title on the line against Drew Gulak this week. That match was supposed to happen last week, but it didn’t.

Another segment that was supposed to go down last week was Sheamus’ Toast To Jeff Hardy. Fans will finally see that segment this week.

All that and more is promised for Friday Night SmackDown this week. Let’s see what WWE brings to the table.

Cole introduced Riddle quickly. Riddle smiled and waved at the crowd as Cole ran down him defeating AJ Styles.

Riddle said being on SmackDown is awesome and being in the ring is “the lovechild of a lot of work and a lot of dreams, bro.” Then Riddle ran down the events of two weeks ago as he said “bro” every other word. Then he said, “bro, I could get used to this.”

Cole asked Riddle why he doesn’t wear boots. Riddle said it’s a long story. He said when he was a child his family went to Wisconsin. He got frost bite because he was going from a hot tub to the pool over and over again. He almost lost his toes over that and he said that’s why he doesn’t wear shoes. It burns his feet to have shoes on.

Riddle said he can’t feel anything with his feet. Isn’t that a joke from Adam Sandler’s Mr. Deeds movie? Yes, yes it is.

King Corbin came out next to confront Riddle. He said that Riddle was an idiot when he was a little kid and he still is to this day.

Then Corbin chastised Cole for giving Riddle airtime. He kicked him out of the ring next. Corbin brought up how Riddle hit him two weeks ago. Then he said that everyone should bow down to the king.

Corbin said that nobody wants Riddle on SmackDown and he will make sure that Riddle pays for every moment he’s in the ring. “You do you, bro, you do you,” Riddle said.

Riddle and Morrison started out by wrestling for position and then Riddle slammed Johnny Drip Drip to the mat. Morrison got to his feet and slapped the taste out of Riddle’s mouth.

Then Morrison tried an armbar, but Morrison lifted him up and slammed him down. Riddle grabbed John with a gutwrench suplex and kept his hands latched. Morrison countered and went for a kick, Riddle ducked and tried for an ankle lock. John got to the ropes and hit a kick off the second rope.

Morrison got a two count on Riddle kicked him after the kick out. They continued and Morrison went to the apron and nailed a kick before hitting a corkscrew plancha off the top ropes for a two count.

Riddle kicked out again after Morrison hit a running knee. Morrison kicked Riddle and he begged him to “come on!” Then John took off his elbow pad and poked Riddle in the eye before dropping him on the back of his neck.

Following commercial, the two continued. Riddle hit Corbin in the head with his flip flop and Corbin joined ringside. Riddle landed a Bro To Sleep and a German Suplex for a two count.

Morrison lifted Riddle up and slammed him down for another two count. Then Riddle locked in a Bromission, but Morrison stood up with Riddle on his back. They battled on the top rope and Riddle jumped down to get on the other side of John before Morrison reversed a slam from the top. John hit a standing Spanish fly for a two count.

Riddle landed another kick and a knee before Morrison reversed out of the Bro Derek and then Riddle hit a running knee for a two count of his own.

Corbin distracted Riddle and Morrison rolled him up for a two count. Then Riddle rolled Morrison up for the win.

Corbin, Miz, and Morrison were backstage and they weren’t happy. Corbin said that he’s going to cut his legs out from under his career.

This match just started. Styles took Gulak to the tuckbuckles and then threw him out of the ring. Gulak tried to get back in, but Styles kicked him back out to the floor. Gulak took a shot to the apron from Styles before raking his face across the apron.

The match continued on in the ring and Daniel Bryan appeared via Zoom call in the corner and said that Gulak is looking good as Styles beat Gulak down.

Styles continue the offensive on Gulak as he muscled him to the mat. Then he brought Gulak up and punched him before landing a stiff kick.

They continued on in the ring and Bryan popped up on Zoom again to talk about Gulak’s tactics as he continued to take abuse from Styles.

Gulak came back with some punches and then he went to Styles’ knee for moment before Styles shifted things back to his favor. Styles damaged Gulak’s knee on the ropes before he tried for a Calf Crusher, but Gulak grabbed the top rope and revered it into his own Gulock.

Then Styles got out of the ring and he was upset with himself. Then Gulak nailed a baseball slide before they went to commercial again.

Styles hit a brainbuster when they came back from commercial for another two count. Styles continued to punish Gulak while Bryan talked about how great of a wrestler Gulak is.

They continued and then Gulak came back for a moment until AJ Styles turned the tide back to his advantage. The crowd clapped to root Gulak on, as he sent AJ Styles face-first into the top turnbuckle.

Gulak came back with a dropkick and a scoop slam for a two count. Styles got to his feet and they went up top. Styles got underneath Gulak and sent him into the turnbuckle again. Styles caught Gulak and hit him with a Styles Clash, but he didn’t pin him. Instead, he sat there and he stood up and he hit a Phenomenal Forearm for the win.

Bayley came out and said that nobody gives them respect, but The Undertaker does. Bayley claimed that Undertaker called them and demanded they have their own tribute.

Bayley said thankfully the Undertaker is out of here. So they’re doing a tribute for themselves tonight. They aired a video package

After the video they started their own “Thank you Bayley” and “Thank you Sasha” chants. Alexa Bliss and Nikki Cross came out next.

Bliss called the video “inspirational” and they read off a list of their own accomplishments. None of the facts were real, they were making fun of Banks and Bayley.

Cross said she’ll be the next SmackDown Women’s Champion. Bayley laughed at her and Bliss punched her. Then Banks booked Bayley for a match against Bliss.

These two traded position a few times and then Bliss went out of the ring. Bayley kicked Bliss’ fingers when she went for the ropes and then Bayley continued working on Bliss’ arm when they returned to the ring.

Bliss rolled Bayley up for a two count and then Bayley regained control and focused on her arm. Bliss flipped out of an armbar and slapped Bayley to put her down.

Bayley grabbed Bliss’ arm again and slammed it against the ring apron before getting a two count. Bayley hit a running bulldog and got another two count.

Cross distracted Bayley and then the referee talked to Nikki while Banks hit a cheap shot on Bliss. Cross took out Banks. Then Nikki hit Bayley which caused a DQ.

After the match Nikki Cross brawled with Bayley until Bayley powdered out of the ring.

They aired a video package with a “history lesson” between Bray and Braun.

Nakamura nailed some kicks and then Kofi hit a move off the second rope before dropkicking Nakamura off the apron. They continued on the outside of the ring and Kofi send Nakamura into the hockey boards while Big E laughed at him.

They continued as Kofi rolled Nakamura in. Kofi climbed up top and then Nakamura kicked Kofi as he landed hard. Nakamura stood on the back of Kofi’s head on the ropes and then Cesaro nailed a cheap shot. Big E took out Csaro, and he ran away.

Jessika Carr ejected Big E and Cesaro from ringside. They weren’t happy about that.

They continued after the commercial break as Shinsuke picked Kofi apart with kicks. Then Kofi nailed knee and some punches. Shinsuke shot Kofi into the ropes and hit a back elbow and a kick or two for good measure.

Kofi came back and rallied with some takedowns and a dropkick. Nakamura hit some strikes, and then Kofi climbed up top. Nakamura reversed Kofi’s top rope moved and tried for a roll up pin.

Then Kofi went for Trouble In Paradise, he missed. Nakamura slipped Kofi around to his feet and his an SOS for a two count. Kofi got another two count after landing double knees.

Kofi geared up for Trouble In Paradise, but Nakamura went for a sleeper and then he nailed a knee to the back of the head for the win.

After the match, Cesaro got a table. Big E ran them off, but it’ll probably be a tables match at Extreme Rules.

A Toast To Jeff Hardy

The ring was set up with a little bar and there was a guy in the ring looking like a bartender. Hardy came out to the ring and was looking for Sheamus. He didn’t come out.

Instead, Sheamus appeared on the screen and talked down to Jeff about last week and how he defended The Undertaker’s honor. Sheamus said that Hardy is looking for that quick fix. He kept bringing up Hardy’s addiction and how Jeff has a problem facing reality.

Sheamus said he found a solution to all of Hardy’s problems and the answer was in one of those bottles. Then Sheamus recited a poem as a toast to Hardy that ended with him calling Hardy a junkie.

Hardy asked if Sheamus thought this was funny. He didn’t think it was funny. Sheamus loved it. He said he’d there to help Hardy and not hurt him. He said Jeff doesn’t have to live a lie anymore. That’s why Sheamus sent his personal bartender Jeeves to help him.

Jeeves offered Hardy a glass, but Hardy didn’t take it. Then Jeff Hardy took the drink and asked “what’s the worst that can happen?” Hardy put the glass to his lips twice before pouring it over Jeeves’ head. Then Hardy hit a Swanton Bomb on Jeeves.

Sheamus watched from home on the screen as Hardy posed to close out the show.