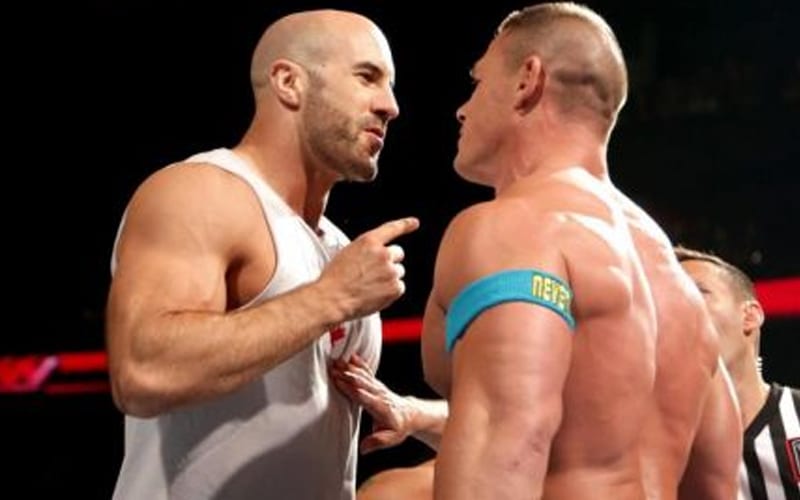 John Cena can produce in the ring with practically any Superstar, especially Cesaro. The Swiss Cyborg was recently on The Bump where he discussed his chemistry with Cena.

Cesaro first wanted to know who he doesn’t have chemistry with. He suggested that it could take a long time trying to figure out someone that The Swiss Superman doesn’t gel with in the ring. He then revealed something that Cena once told him that still sticks with him to this day.

“Let me answer that question with another question. Tell me what WWE Superstar don’t I have great chemistry with? I mean, ask me and you’ll be here all day trying to think of an answer.”

“You know John Cena is one of the top 5 Superstars of all time. His work ethic is second to none. His in-ring ability is amazing and I think everyone knows that, and it is still underrated. He taught me so much coming to WWE and he was one of the guys who was there every live event, every pay-per-view, every RAW, ever SmackDown. He’s an inspiration.”

“[Cena] told me once that you’re only as good as your last match and I kinda live in a similar mindset, but that just changed my mindset completely and that’s why I try to approach every match to try and make it something special and I feel like, you know that’s why people enjoy watching Cesaro matches I’d like to think because you don’t know what to expect. That’s the beauty of it. That’s why I watched wrestling and that’s why I’m still a huge fan of it.”

We’ll have to see if Cesaro and John Cena ever face off again. Since Cena rarely shows up to WWE it’s not likely. A match against Cesaro might be worth coming back for.

You can check out one of Cesaro and Cena’s great matches below.