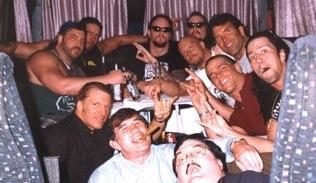 Back in the 90s, two powerful factions of top Superstars ruled the WWE Locker-room. One was The Kliq that consisted of Shawn Michaels, Triple H, Kevin Nash, Scott Hall & X-Pac while the other was the Bone Street Krew which had The Undertaker, Yokozuna, Savio Vega, The Godfather, Henry Godwin and more.

Triple H was recently interviewed by Gorilla Position and during that interview he addressed the rumors about animosity between The Kliq and The Bone Street Krew.

The King of Kings said that although there was no real animosity between the two groups, they often played out the “crew vs crew” scenario in locker-rooms & bars in good spirits. By the end of the night, Hunter said, both crews would sit together and laugh it all out but people would always see them “separated”.

There was no real animosity or anything there but like putting stickers on the locker room or whatever, we’d play it up in front of each other. If we were in Germany and everybody went to the bar at night, we’d put our crew on one side, they’d put their crew on the other side. We’d laugh about it and talk about it the next day and everything like that. By the end of the night, when things thinned out, we might all be together in the same place laughing and joking, but the majority of people saw us separated.

Triple H then recalled the time when all BSK members got matching tattoos and how The Kliq didn’t want to do that because that’d make them marks for themselves.