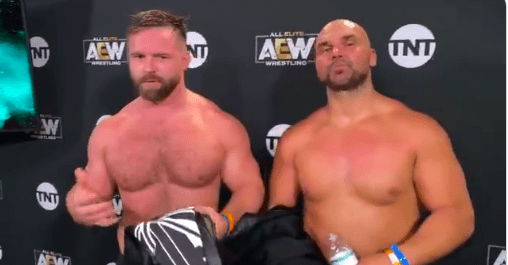 On this week’s episode of AEW Dynamite, FTR made their in-ring debut against The Butcher & The Blade and ended up winning. They also had a brief confrontation with the Young Bucks after the match.

After the match, Dax Harwood and Cash Wheeler were interviewed backstage for their thoughts on their very first match in AEW. The duo said that their first bout in the company went better than accepted.

They acknowledged the fact that they’ve not been in action for quite some time now which has led to some ring rust. However, the match reminded them of “old times” and that was all they needed.

It went better than expected for us. It’s been a while since we’ve been in the ring so you never really know what to expect. We got some rust but it felt like old times out there today and you said we had a bunch of coaches out there and it’s all guys we’ve looked up to our whole careers and we’ve got to model ourselves after.

Ever since FTR’s release from WWE, the fans have been yearning for the ultimate tag-team dream match between them and the Young Bucks. Now, that dream will be realized soon in AEW.