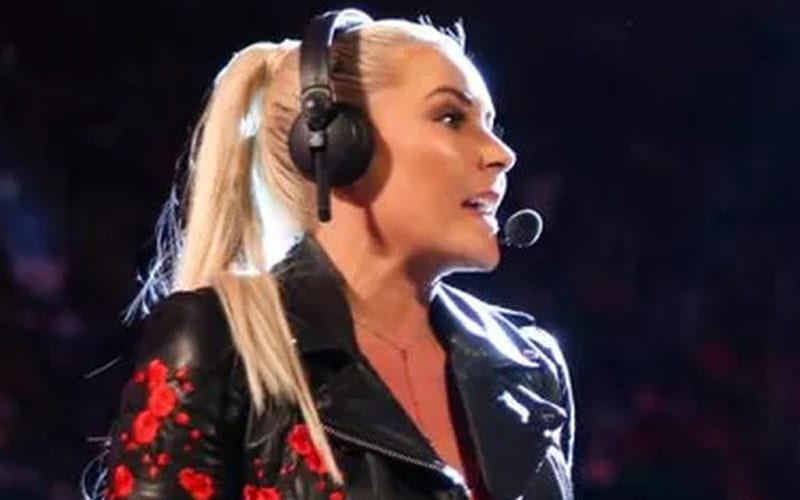 Renee Young was the first full-time female announcer in WWE history. She is proud to have that feather in her cap, but it wasn’t easy.

While speaking to the Gorilla Position podcast, Renee Young spoke in-depth about her issues on WWE RAW as a member of the commentary team. Overall she did not enjoy her time behind the announce desk as she found constant pressure.

There was a lot of doubt because even when she thought things were fine, another problem could be around the corner that she didn’t realize. Time was crunched and Renee Young had zero preparation before she was thrust into an environment of live announcing while Vince McMahon barked orders into her ear.

“I was so happy to have that feather in my cap. I definitely wanted to be the woman to step in and do it and you know I don’t wanna say I have mixed emotions, it just wasn’t the job for me and I didn’t enjoy it. I really felt stressed out about it. I always felt that I didn’t know what I’m doing. I’m over my head which maybe made me perform not the best that I could in that circumstance, but you know then you have a bad show and you’re like eff it just throw everything against the wall! It was like I liked that show, I felt good about that show and there are little moments that you’re proud of that you’re happy with.”

“Yeah, it was just tough. It was tough and it was a long year. I went into it very unprepared. I did commentary in NXT once years prior to that and it was fairly short stint, I was not doing it in the time in between there [Performance Center]. I was not getting in reps. It just sorta happened.”

“They’re like ‘Hey we want you to fill in on RAW because Coach was doing something he wasn’t able to be there.’ I was like ‘Hell yeah I’ll step in and do that.’ It went well, everything went well, of course, the bar was set low because nobody knew what to expect. It was like, she did fine. Then I get offered the full-time job with it and that’s when the pressure started to mount. It was like, ‘wait, you don’t actually know how to do commentary?!’ No, who told you I know how to do commentary?!”

Renee went on to say that learning on the fly in that sort of environment was tough because she couldn’t find a mentor and get the help she needed. She stated that everyone was so busy that nobody could focus on what her issues were.

She described it as being between “a rock and a hard place” because there just wasn’t the time to work on what needed to be improved. She went to the Performance Center “a couple of times” during that year-long period as well, but so many busy schedules created a constant problem.

Renee Young is much happier now as host of WWE Backstage.