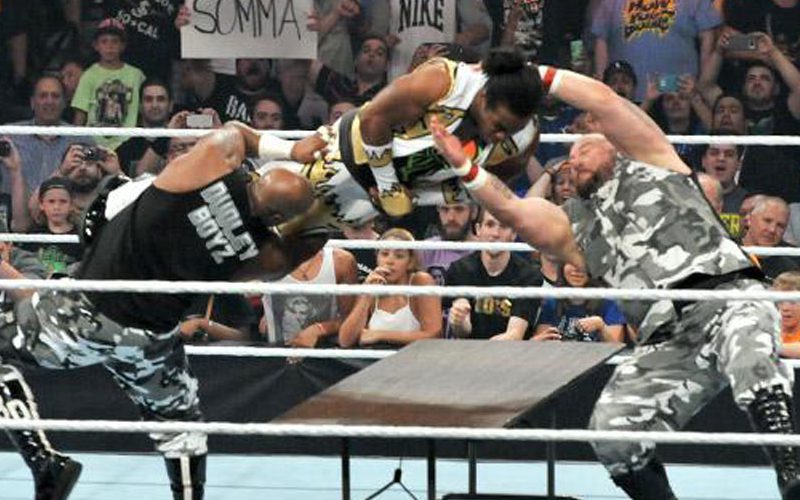 The Dudley Boyz are WWE Hall Of Famers and many fans associate the team with their devastating 3D finisher. This was something that Bully Ray came up with himself, but he had an unlikely inspiration.

While speaking to Chris Van Vliet, Bubba Ray Dudley explained that he was inspired to create the 3D when watching a Rey Mysterio vs Dean Malenko match. The pop-up pancake faceplant bump that Mr. 6-1-9 took sparked a new thought in Bubba’s brain.

“I came up with the 3D watching Dean Malenko vs. Rey Mysterio, I think on Nitro. I saw Dean shoot Rey and do a pop-up pancake facebump. I thought to myself, ‘Oh wow. Wouldn’t be cool to shoot a guy so high in the air that you can spin underneath and hit a Diamond Cutter. That morphed into the Bubba Cutter, which I used. When me and D-Von got together, I thought we need a tag team variant of the Diamond Cutter because it’s never been done before,” Ray said.

Bubba Ray and D-Von needed to fine tune their new move. They called on Spike Dudley to be their guinea pig and he took about 100 of the ugliest 3Ds ever.

“We went to the ECW dojo in Long Island, we took Spike with us and that tough bastard, that tough, little son of a bitch, took about a hundred of the ugliest 3Ds ever. If you look at the first 3D we hit on him, it was brutal. It took a lot of time to perfect it, but we knew from the beginning that was going to be it. I don’t think we ever worked on another tag team finish,”

The 3D is synonymous with the Dudley Boyz to the point where if anyone other team does a similar move it’s automatically credited to Bubba and D-Von. It’s interesting how that heavyweight move was inspired by a Cruiserweight contest. Thankfully, they had someone like Spike Dudley to help them make sure they got the move down.