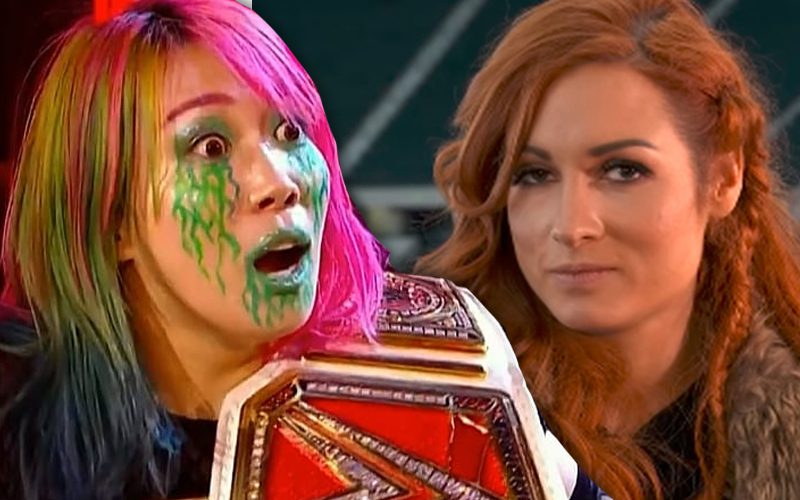 Becky Lynch had to relinquish the RAW Women’s Title when she discovered that she is pregnant. Asuka is the new champion, but The Man was very happy for The Empress Of Tomorrow.

WWE doesn’t talk about Asuka as a mother, and it’s not advertised, but it’s true. She just doesn’t discuss her private life or put her family out on social media. Lynch looks at Asuka as a great example of a working mother who can do it all.

While speaking to Sports Illustrated, Becky Lynch stated that it meant a lot that she could pass on her title to Asuka. The two have been to war in the past and Asuka has proven herself as a working mother who can still kick ass.

“Passing that championship onto Asuka meant a lot. She really, really deserves it. And another element that people missed, because it’s not really advertised, is that she’s a working mom.”

“She’s proven that you can do it all. You can be a badass and go off and have a family, you can come in and still kick more ass, have a YouTube show, and be entertaining as all hell. The fact that she was the person to take that title from me meant a lot to me.”

Asuka being a mother is something that WWE doesn’t really talk about, but Charlotte Flair brought it up as well. Flair also alluded to the fact that Asuka is married, too. After defeating Asuka at WrestleMania 34, Flair said “she’s a mother, she’s a wife, she does it all” when saying that she wanted to be the best Charlotte Flair she could be for Asuka. You can check that out in the clip below at around the :30 mark.

Now Asuka is RAW Women’s Champion and set to get take on either Nia Jax, Natalya, or Charlotte Flair at Backlash. We’ll have to stay tuned to see how soon WWE can set up a rematch between Asuka and Becky Lynch.