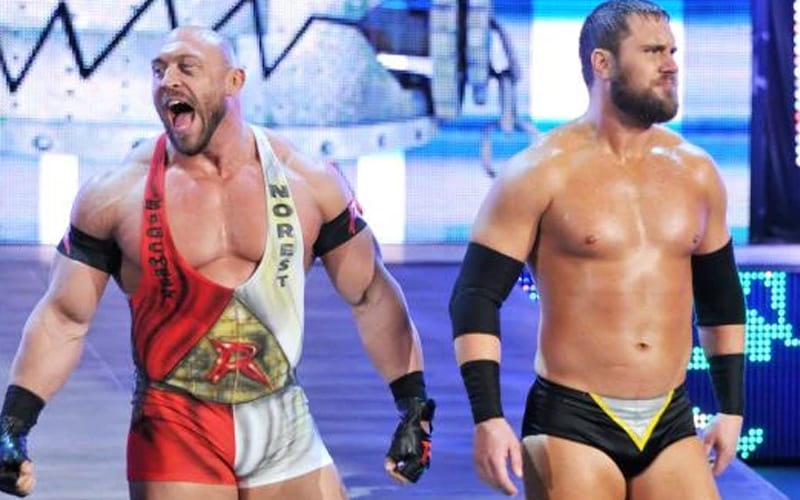 Curtis Axel is no longer a WWE Superstar. He was released from his contract recently just after the big wave of roster cuts. Now his former Rybaxel tag team partner is speaking out about it.

During Conversations With The Big Guy, Ryback opened up about Axel’s release. He was bummed because of the timing, but this could be a good thing. WWE was never going to use Joe Hennig to his full potential.

“Yeah, I sent him a voice message yesterday and I’m sure [I’ll] hopefully hear back from him soon. I’d like to get him on the show, not even talk — just bullsh*t stories, we had a lot of good times. That one I saw that, I was actually recording the show yesterday and I checked my phone after and saw the tweet tagged with stuff with him, and I was like, ‘No, man!’ And then looked and saw he’d been released.”

“In one way, I’m very happy for him. Because I feel like he was never going to be allowed to be himself or to do anything significant there. On the other hand, though, I know he has a wife and kids, and I know them. And it’s — when you have a steady paycheck coming in for years, and then that all of a sudden is not going to be there anymore in this times of uncertainty, it makes me a little bit upset that he got released with like, the other guys like Heath [Slater] that I personally am invested in and know. I just think it is horrible timing with everything, but hopefully all this is easing up.”

“I think — I truly mean this, like with Heath and him, Joe. If he could be Joe Hennig, I think AEW can get some great, great stuff out of him and I think he could add to that roster, in one way or another.”

There is a lot of uncertainty right now. The pro wrestling world is slowly opening up along with the rest of society. We are all hoping that continued awareness will help stop any second wave of COVID-19 that might be ahead. Hopefully, life and pro wrestling can get back to normal very soon.

Curtis Axel is probably chomping at the bit to prove himself outside of WWE.