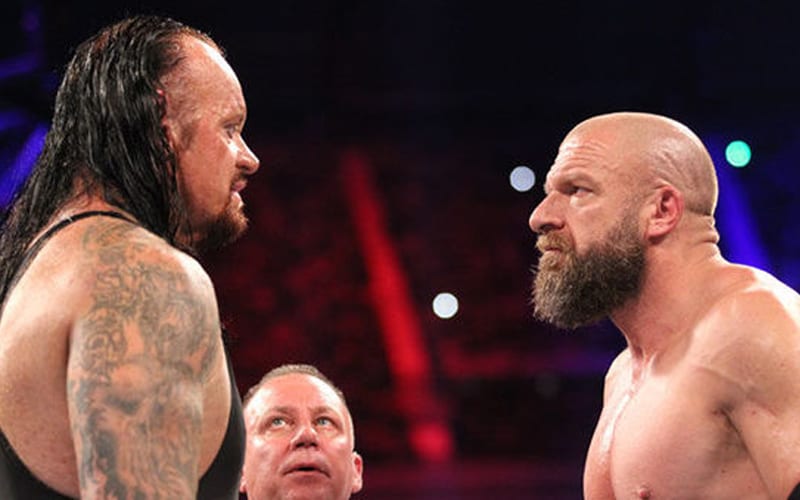 The Undertaker was not happy about his performance against Roman Reigns at WrestleMania 33. He was determined to make it back and redeem himself, but it took a lot of work.

While discussing his comeback to WWE on The Bump, The Undertaker revealed that Triple H was a big part in helping him build his confidence once again. The Game was able to remind The Deadman that he belonged in the squared circle.

“I think that working only one time a year caught up with me. Brock Lesnar was able to throw my body around the ring, it was nothing that Brock did, but it was just my body wasn’t used to the trauma. Once I got used to the concussion and all that, it was like ‘what’s happened to you?’ You have a reputation as a tough son of a gun? What happened to you? Is it time to call it a day? Then I understood what Flair was going through. So I had all this self-doubt after all these years of success and doing everything it was like ‘I’m not sure I can do this again.'”

“It really took a while to really get that confidence back and I tell ya, someone who has really helped me with it was Triple H. It was a real struggle to get to feeling like I was in charge and knew what the hell belonged in the ring.”

The Undertaker’s legendary story is being told in the five-part Last Ride docuseries. It is worth a watch and the first episode is available to stream on the WWE Network. Click here for more information on episode two.

We’ll have to wait and see if The Undertaker and Triple H have another match. Even if they never meet again inside the squared circle The Game has apparently done more than enough for Taker.