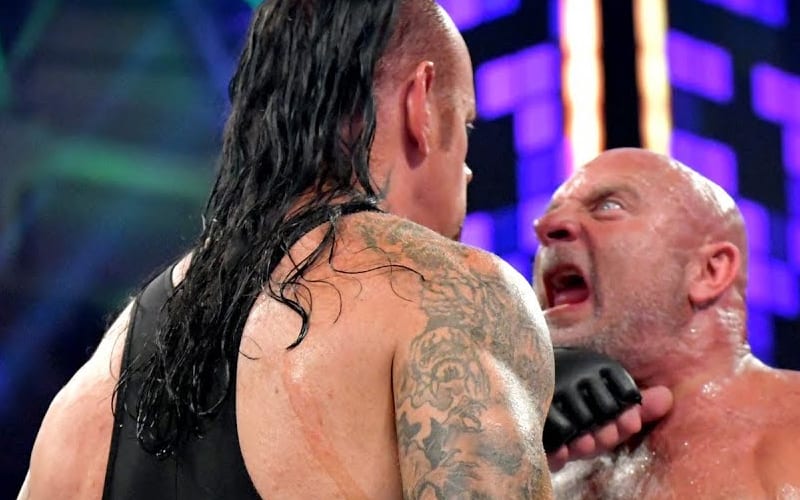 The Undertaker defeated Goldberg in Saudi Arabia, but it was not the best showing for either of them. Michelle McCool was at home, and she was very scared for her husband.

While speaking to the New York Post, Michelle McCool opened up about how she felt while watching her husband wrestle Goldberg at Super ShowDown. The Undertaker put his body through a lot of damage during his career, but McCool didn’t know if he was okay.

“That was really scary for me. Obviously knowing the business, as soon as I saw that I texted our doctors. I was like, ‘Is he OK?’ Because it looked bad. You’re centimeters away from doing some real damage. So I knew it was bad.”

“Mark has literally been caught on fire, stood in a pod for 40 minutes and wrestled another 40 minutes. He’s busted up both eye sockets in matches. He normally responds with, ‘I’m good, babe, I’m good.’ So after that match when I talked to him and I think his exact words were, ‘My back is jacked up. My neck is jacked up.’”

“I was like for him to put that into words and verbally tell me truly how he’s feeling, it was just I couldn’t imagine the pain. So that was scary, knowing now he’s got to fly so many hours across the world and he had an appearance the next morning when he landed in the States in Boston or somewhere that he’s not gonna say no to.”

“He does that and standing with fans for four to five hours. It was bad. It was scary. I don’t think he realized until this documentary when he saw it again just how close he was to, yeah, yeah.”

The Undertaker went through a lot during that short match against Goldberg. Hopefully, Michelle McCool won’t have to watch another one of her husband’s matches in fear again.

What do you remember most from The Undertaker vs Goldberg? Sound off in the comments below!