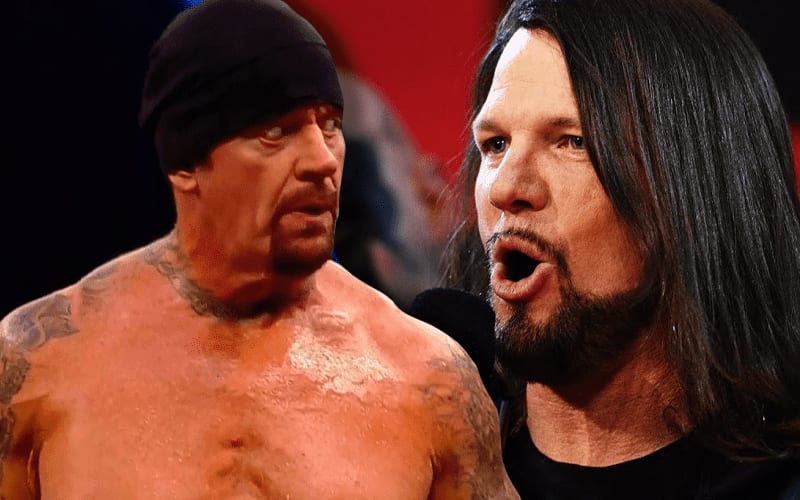 AJ Styles is back in WWE after losing to The Undertaker in a Boneyard Match at WrestleMania 36. Styles doesn’t seem to think he lost.

While speaking to WWE The Bump, AJ Styles was asked about his Boneyard Match with the Undertaker. He stated that the match presented a different version of himself and The Deadman. They were able to take the situation in front of them and work with it.

“I think it was a different version of AJ Styles and not just AJ Styles, but also The Undertaker. Not only is the Money In The Bank match unique, but the Boneyard Match was unique. It was different and I gotta be honest with you guys, I can’t take credit for the situation we were in — we were in a position to have an unbelievable encounter, Undertaker and I. Situations are what they are and again, you take advantage of them.”

When it comes to the possibility of facing The Undertaker again, AJ Styles welcomes it. In fact, he’s not too sure he even lost at WrestleMania 36.

“Well, I can tell you this there wasn’t a referee. Did I lose? I don’t know. Maybe I got some dirt thrown on me, but that doesn’t mean I lost. Unfinished business? Absolutely. If I ever have the chance to get my hands on the Undertaker, no problem. Well, obviously there’s a problem, but I’m looking forward to it.”

The Undertaker doesn’t come back around very often. Perhaps he will stop by and have an actual match with AJ Styles next time inside the squared circle.

Do you think The Undertaker needs to come back for one more match against AJ Styles? Sound off in the comments below!