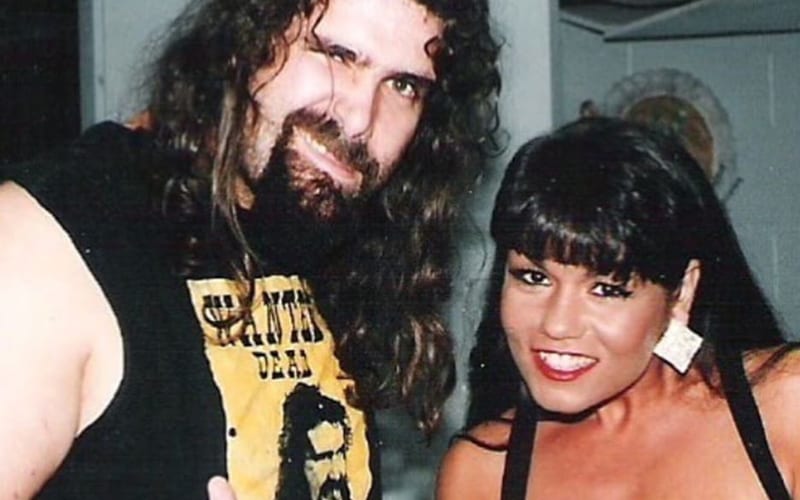 Chris Benoit will never be in the WWE Hall Of Fame due to the terrible events surrounding his death. His wife Nancy belongs in the Hall Of Fame if you ask Mick Foley.

The Mickster took to Facebook earlier today where he released a lengthy tribute to Nancy Benoit. He opened up about his personal experiences with Nancy and shared a bit of her story through his eyes.

Foley also stated that she belongs in the WWE Hall Of Fame. He said it’s the right thing to do. We’ll have to see if that ever comes to pass.

For the past thirteen years, Nancy Benoit’s life has been largely defined in the public eye by how she died. I think it’s about time we changed that way of thinking. Wouldn’t it be nice if we could pause for a moment to remember instead, how she lived, how she worked, and to reflect on what her legacy in pro wrestling should be?

Just a couple weeks ago, I saw that someone by the last name of Toffoloni was following me on Twitter. Although she would later joke that in Italy, Toffoloni is like Smith in the United States, I knew this had to be Nancy’s sister, Sandra. With the click of a button, I found myself reconnected to Nancy’s family – and by extension felt reconnected to Nancy herself. Sandra and I traded photos and stories, promised to meet up when this crazy virus subsides, and later that night, I found myself thinking back to the very first time time I met Nancy.

It was November 1989, in North Carolina, following an evening of WCW tapings that had seen me drop a picture perfect elbow off the ring apron on Nasty Ned Brady – after which, for the very first time, I said the words “bang bang” on camera. It was Kevin Sullivan, along with Jim Cornette, who had come up with the ingenious idea of having me turn on every partner I teamed with, essentially allowing me to get a push without actually winning matches (a push without a push, if that makes sense) and the idea was starting to gain some traction. So after the tapings, Sullivan was talking with me about plans for the future – plans that might involve Kevin and I becoming a team. Nancy, married to Kevin at the time, was there for the meeting, and could not have been nicer. That was my first personal observance of her; just how nice she was. Nice and stunningly beautiful! Nancy was a far bigger star than I was at that time – having made a memorable television metamorphosis from wide-eyed innocent Robin Greene to the sultry, glamorous Woman, manager of WWE Hall of Famer Ron Simmons and Butch Reed as the tag-team Doom. During my six month run with the company, I was always fascinated by how the villainous onscreen bad girl was so kind and approachable in real life.

Nancy and I worked closely together in ECW, during my feud with the Sandman in 1995. The Sandman/Woman odd-couple had great chemistry together, and the pairing – with the credibility she brought with her, played a major role in Sandman’s breakout success. From there, she went back to WCW and the angle between her current and future husbands – Kevin Sullivan and Chris Benoit – the feud that both changed, and ultimately, by extension, ended her life. When Chris made the move to WWE in 2000, I saw Nancy many times over the years, her son Daniel her constant backstage companion. Each and every time we met, she was the same approachable, down to earth person I’d met that November night in 1989. Her smile was always warm, her words were always kind.

But like so many others, for the past thirteen years, I had come to think of Nancy based almost solely on her tragic and untimely death. But these past couple weeks have really opened my eyes to just how much she accomplished in the wrestling business. While the wrestling world at-large may have learned of Nancy in 1989, she was already a seasoned veteran by that point – having become a part of Kevin Sullivan‘s stable as Fallen Angel in 1984. While we, as wrestlers sometimes wish we could turn back the clock and have the type of crowd-heat that wrestlers of a previous generation enjoyed, it took a special type of person to stand the type of heat created with Kevin Sullivan working a Satanist gimmick in Florida and Southwest Championship Wrestling in the mid 1980s. Nancy was that special type of person. Even fans who did not believe in the legitimacy of wrestling itself, believed in the gimmick Sullivan had created, and the heat it created was substantial and genuine. To a certain extent, Nancy was putting her well-being, even her life at risk, every time she went to work.

“Dark Side of the Ring” did an excellent job of uncovering truths behind the shocking 2007 murder/suicide of Nancy, Daniel and Chris Benoit. In the aftermath of the Spike documentary, fans and historians once again pondered the way that Chris Benoit – one of the finest performers our business has ever seen – should be remembered. It’s an important discussion. But equally important to me, is that several fans, started talking about the career of Nancy Benoit, and how she should be remembered. For the first time I can recall, talk surfaced of Nancy possibly being inducted into the WWE Hall of Fame – a topic I had never really considered it before. But seeing the “Dark Side of the Ring”, reestablishing contact with Sandra, and looking back on Nancy’s career these past couple of weeks has been an eye-opener for me. I would love to see Nancy inducted into the WWE Hall of Fame – under whatever name or character her family and WWE collectively decide. For her work as Fallen Angel, I believe she deserves to be included. For her work as Woman during her first run in WCW – when she feuded with Rick Steiner, managed Doom, and managed The 4 Horsemen – I believe she deserves to be included. For her run in ECW, and her second run with WCW – where she helped create a fascinating angle that blurred the line between storyline and reality – I believe she deserves to be included.

Inducting Nancy Toffoloni into the WWE Hall of Fame is the right thing to do. Let us remember her, and define her for who she was and what she did in life.

WWE will hold another Hall Of Fame ceremony, but it might have to wait. The class of 2020 was already picked before WrestleMania, but if Foley had his way they would slide Nancy Benoit in there so she can be remembered for more than how she tragically died.