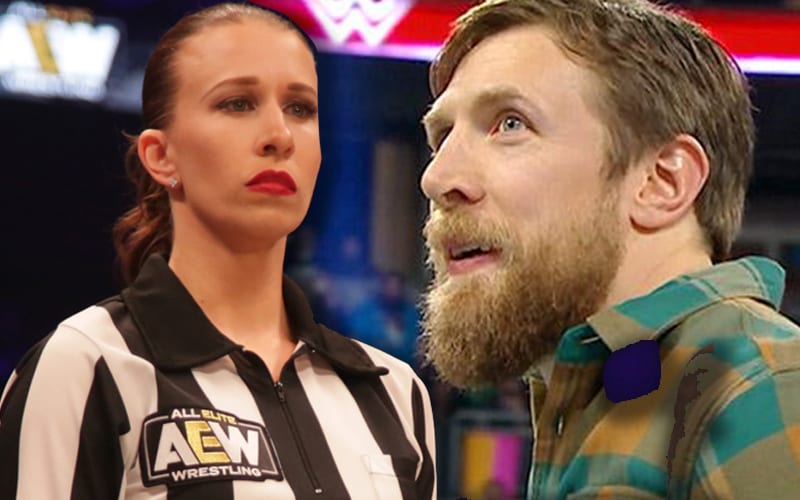 Aubrey Edwards is on television practically every week on AEW Dynamite. Some might not realize this, but she also made a cameo during a very famous moment in WWE History as well.

Aubrey Edwards said on AEW Unrestricted that she didn’t watch pro wrestling until she walked in on CM Punk’s pipe bomb. She wanted to know more about it as she realized that pro wrestling was such an eclectic form of entertainment. Suddenly, she was hooked.

Edwards was soon making big trips across the country, and planning vacations around making NXT TakeOver shows. She was also in attendance on the night Daniel Bryan retired in Seattle where she became a meme long before her days in AEW.

“WrestleMania 31 we went to San Diego. 32 we went to Dallas. Like, we went to TakeOver Brooklyn like I’m literally planning my family trips around TakeOver so I can justify going to New York. So I went deep, deep into it because I had so much to catch up on.”

“There’s this really famous picture of me […] Daniel Bryan’s retirement show he was at and he did it in Seattle where the Sonic played and I’m in the front row just bawling my eyes out and if you actually look up ‘Daniel Bryan crying girl’ on Google I come up and I’m just crying. It’s pretty ridiculous when your wrestling fandom makes you a meme.”

Sure enough, if you Google “Daniel Bryan crying girl,” you get Aubrey Edwards being a total fan girl in the front row watching Daniel Bryan announce his retirement. You can check that out below.