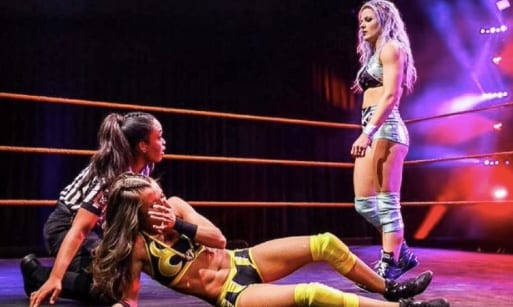 On this week’s episode of NXT, Candice LeRae gave fans a glimpse into what her in-ring work as a heel is going to look like when she beat fan favourite Kacy Catanzaro pretty quickly.

Catanzaro is well known for being one of the most athletic members of the WWE family, and while she recently took some time out from the ring to nurse some injuries, it appears as if she’s ready to climb the ladder once again.

Unfortunately, as we’ve already stated, things didn’t quite work out for her on Wednesday night.

She may not ever become a world champion in WWE, but we do feel like Kacy has that sort of potential in her – and it’s just a case of making her feel like a believable threat.

If they can tweak her character and really play off of her athleticism, then they could be onto something.