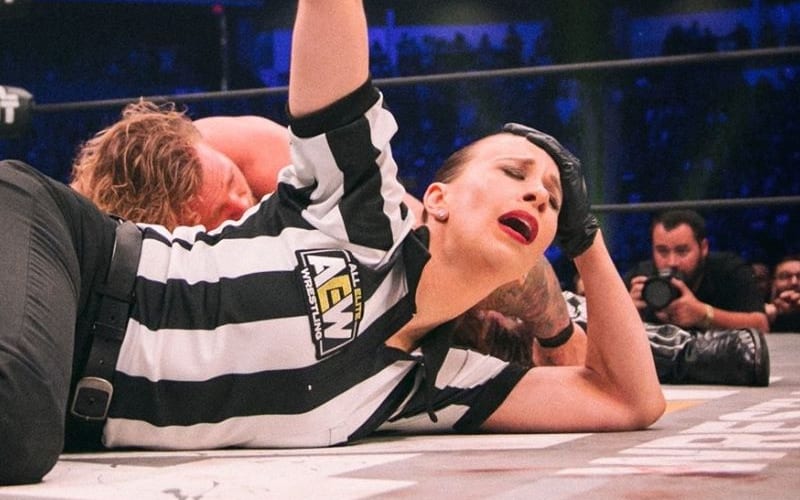 AEW fans quickly noticed that it takes a lot to be disqualified in an All Elite Wrestling ring. Another thing that a lot of fans noticed was AEW’s female referee as she captured quite a large spotlight.

AEW referee Aubrey Edwards revealed on AEW Unrestricted that a “vocal minority” of fans will complain about her every week. She’s heard that her lipstick is too distracting which makes her wonder if they are watching the wrestling action.

She went on to explain that AEW’s social media team receives complaints every week that she’s too distracting. It doesn’t sound like those complaints are getting to her though.

“There’s always going to be people who vocalize what they don’t like. There’s always that really vocal minority. The ones that are behind the keyboards that are like, ‘Oh, I don’t like this.’ It’s fine. You’re allowed to like or not like certain things. Everyone’s different. There’s enough wrestling out there for you, whatever. But the thing that’s really interesting is just how many — it’s a very common occurrence where people just say I take too much attention away from the wrestlers, I’m too distracting.”

“My favorite comment online once was that someone couldn’t watch the match because my lipstick was too distracting. Yeah, I’m like, ‘You’re not paying attention to wrestling. Like what the hell are you doing buddy?’ I think the social media team gets at least one email a week about me and how I’m a distraction and people can’t watch All Elite Wrestling because I’m on the TV.”

Aubrey Edwards also works in the AEW offices. She explained that she picks up practically any job that someone’s not already doing. She is also incredibly dedicated to AEW as she elected to stay in the Jacksonville area during AEW tapings instead of going back to Seattle where she might not be allowed to return.

Do you think Aubrey Edwards is distracting on AEW television? Is she the best referee in the business today? Sound off in our new and improved comments section below!