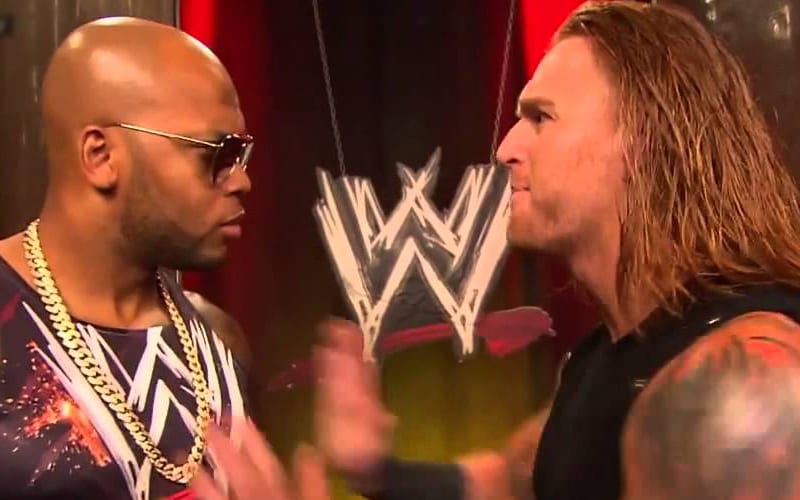 Heath Slater was involved in plenty of angles through his WWE career. One WrestleMania moment was especially painful.

While speaking to Busted Open Radio, Heath Slater spoke about his WrestleMania segment with Flo Rida. It didn’t go as smoothly as he had hoped. Flo Rida pushed Heath Slater against a brick wall several times to the point where it was really getting to him.

Slater admitted that he eventually looked over at Road Dogg who was there overseeing the segment. He told Road Dogg that he’s not taking another one of those stiff shoves from the “Good Feeling” rapper.

“It’s one of those things man. That moment — that’s when Flo Rida pushed me and I went against the wall, right? Alright, get this sh*t. So, literally they wanted Flo Rida to do an interview. Just a little 20 second whatever. So, they’re like, ‘Heath, you wanna do this interview with Flo Rida? He’s gonna push you down’ or whatever. I’m just like, ‘Sure, why not. It’s Flo Rida. He’s actually a big dude. He was very popular back then,’ so I literally said, ‘Yeah sure, why not’ because I’ve always did that. I didn’t know how to say ‘no’ type deal, you know?”

“But what got me was when we were in there and he was pushing me, he legit pushed me about ten times against the damn cinder block wall to where I looked over at Road Dogg and I’m like, ‘Dogg, I’m not taking no more. This better be it.’ To where it was just like, ‘Yeah, I’m at WrestleMania for getting pushed down by Flo Rida but my goodness, this is the hardest back bumps that I’ve taken in years.’”

“So, it’s one of those things to where… yeah I’m on Mania for that and which it ain’t like, ‘Woo hoo! I got on WrestleMania and got beat up by Flo Rida.’ Nothing like that. It wasn’t one of those — I done forgot about it, being honest until you mentioned it. I don’t take shame in doing stuff like that. If Snoop Dogg wanted to clothesline me and throw me over the top rope, sure. I’ll make it look like Hulk Hogan did it back in the 80s, you know what I mean? But it’s just one of those things where I don’t take — I’m not opposed to doing it. So, I don’t know if that answers your question but I do know that my goodness, he has a hard push and my back hurt, like legit.”

Sometimes people don’t appreciate everything that a wrestler goes through to put them over. It hurts to take bumps for someone, but they do it for the love of pro wrestling. Flo Rida might not have meant to shove Heath Slater so hard, but he was apparently taking some liberties. Thankfully, they were able to get the segment done in about ten takes.

Would you take ten shoves against a brick wall from Flo Rida? Sound off in the comments below!