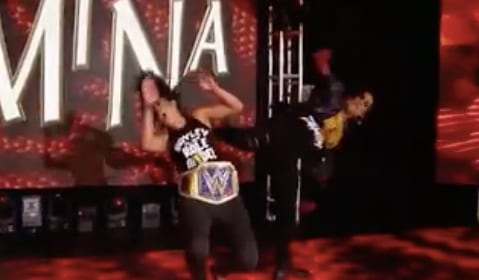 Bayley’s night didn’t really go to plan last night on SmackDown after she had an argument with Sasha Banks and also received a nasty kick to the head at the hands of Tamina.

While many fans have laughed off Tamina as nothing more than a placeholder challenger, WWE has actually done a decent job of making her feel like a legitimate threat.

She probably won’t win the title, but she’s certainly managed to get Bayley’s attention.

We’re intrigued to see what’s going to come next at Money in the Bank, and whether or not these two are able to put on something resembling an entertaining match.

The intrigue behind Sasha’s role in all of this can’t be ignored, either, with fans believing that she will eventually challenge Bayley for the SmackDown Women’s Championship – potentially at SummerSlam.

Can Tamina cause an upset? Only time will tell.