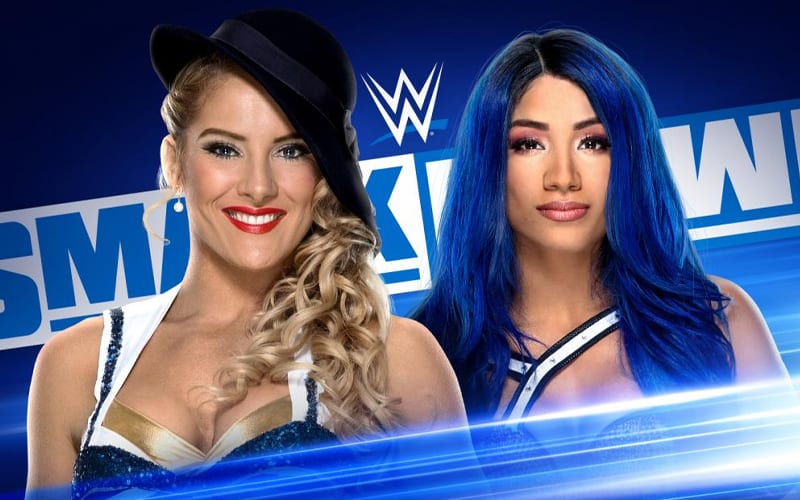 This episode will likely be built around The King Of Kings as WWE celebrates Triple H’s career. Fans can probably expect a lot of clips from Triple H’s 25 year history with WWE. We might get a surprise or two as well.

Alexa Bliss and Nikki Cross will defend the WWE Women’s Tag Team Titles against Carmella and Dana Brooke. That could be an interesting title defense.

WWE will also take a special look at the history between Braun Strowman and Bray Wyatt. Those two are set to do battle at Money In The Bank for the WWE Universal Title.

Big E started out with his magical voice yelling: “AHHHHH PEOPLE AT HOME!” We shouldn’t dare be sour as we feel the power.

Then Big E and Kofi came out and they were very happy about being 8-time champs. Kofi gave Big E props for winning the titles last week. Big E had to remind Kofi that there are no fans to applaud him.

They talked about how they have more title reigns than Edge & Christian, Demolition, the New Age Outlaws and more. Then the Lucha House Party came out who congratulated New Day.

Dorado said “what’s not Lucha Lit” is sitting in the back and watching other teams get opportunities. They wanted to challenge for the titles, then Miz and Morrison came down and walked right past them to the ring.

They said that New Day’s win was cheap and they didn’t deliver the titles. Morrison said they’ve never beat them on a two-on-two match. They want their titles back and they want them tonight.

The Lucha House Party butted in and Metalik started speaking Spanish. Miz told Morrison to interpret it, but he lied and said Metalik tried to put Miz over. Big E said that’s not what Metalik said. Then he said he’s not repeating it.

The Forgotten Sons came down next. The Miz asked who the hell are they. Cutler introduced them. He said they actually served their country. They continued to introduce themselves. This soon resulted in a brawl as Miz and Morrison and Lucha House Party left. Then the Forgotten Sons laid out Kofi and Big E.

They played a promo video from Triple H’s beginning in 1995.

They wrestled in the ring for a bit and then Gulak got pumped up and sent Corbin outside. Drew then hit a shotgun dropkick on Corbin that went him over the announce table as they cut to commercial.

Corbin did his spot where he runs around the turnbuckle and hits a clothesline for a two count when we got back from commercial. Bryan was at ringside encouraging Gulak as Corbin kept using his size to overpower Gulak.

Corbin stomped Gulak down in the corner, but Gulak pressed on. Drew hit a crossbody for a two count and then Corbin went outside. Drew sent Corbin into the steps by hitting a dragon screw on him. They returned to the ring and Drew almost got a two count.

Nakamura and Cesaro grabbed Bryan and they sent him into the wall. Drew got distracted and Corbin used this opportunity to hit the End Of Days and get the win.

Now Corbin is in the Money In The Bank match.

After the match was over, Cesaro and Nakamura held Gulak and he knocked him in the head with his scepter. Sami Zayn must still be out after his wisdom teeth surgery.

Sheamus won very quickly while screaming about demanding respect. After a Brogue Kick, he won the match.

They played a Jeff Hardy retrospective video about the Hardy’s WrestleMania 33 return.

Sheamus stuck around and knocked Michael Cole’s headset off for some reason. He looked mad at Cole.

The match started that Miz took advantage over Dorado early on. Morrison took the tag and he hit a slingshot elbow drop for a two count.

Dorado hit an armdrag when Morrison was showboating. Then he tagged Metalik who almost got a pinfall. Dorado got the tag and Morrison put him down and hit a running knee before tagging Miz.

They hit a double gut buster and Dorado tried to fight back, but Miz kept beating him down. He tagged Morrison in again and they took turns kicking Dorado before Morrison hit a standing shooting star press for a two count.

Miz took the tag as Dorado created separation. Metalik got the tag anyway and took some chops to Miz before flipping and catching a right hand. Then Metalik hit a bulldog and climbed up top, but Miz got his feet up on the dive and Metalik sold as Miz gloated in front of zero fans.

Metalik reversed out of a Skull Crushing Finale and got the win.

Banks had a fan that was a picture of Evan’s daughter. That was a nice touch.

The match started out with Evans going insane on Banks and Bayley. She tried to brawl with both of them before Banks took a cheap shot into the post and got into the ring for a two count. Banks continued to take advantage after that.

Lacey fought out of the corner and hit two clotheslines before nailing a running knee, but Banks rolled out to the apron and drove Lacey Evans’ shoulder into the post. Banks hit her double knee drop from the top for a two count then she applied another hold.

It looked like Evans’ mouth was busted, at least it looked that way. It appeared that she had blood all over her teeth. Then Evans landed her double knee spot before banging Banks’ head off the ring post over and over again.

They fought on the top rope and Banks got down to wedge Evans’ hand between her foot and the turnbuckle. Banks hit a powerbomb and got a Bank Statement which Evans rolled out of. Then Evans landed the Women’s Right for a two count, but Bayley put her foot on the ropes.

Evans grabbed Bayley and then Banks went for a pin, but the ref didn’t see her because of Bayley. Evans kicked out and hit another Women’s Right for the win.

Tamina came out and took Bayley down with a kick as she was leaving.

They aired a promo video about the history between Bray Wyatt and Braun Strowman.

Brooke started out with a dropkick that took Cross out of the ring. Carmella hit a dive on Bliss and Cross jumped Mella. This was chaos to start out the match before a commercial break started.

Mella had the upperhand on Bliss when we came back from the break. Cross broke up a pinfall attempt, but then Brook took her out with a flipping elbow on the outside.

Bliss put Mella down and then Carmella stopped Bliss on the top rope. Cross tagged herself in as Mella hit a rana. Cross got a nearfall on Mella and then tagged Bliss again. Mella kicked Cross twice, but then Cross and Bliss hit a modified 3d for the win.

Triple H didn’t get much out before HBK came down. HBK had two words: Social Distancing.

Michaels send out hundreds of invitations, but nobody showed up. “At least Cole and Corey showed,” Triple H.

HBK brought up his own 25th Year Anniversary. Triple H said it’s hard to boil it down to just one. HBK then said he never had a 25th year celebration. Triple H said when he gets to the office heads are gonna roll because he should have had one.

Then they showed a bunch of DX bloopers through the years. Michaels brought HHH’s 14 World Championships. Then he said he likes to think of himself as Mr WrestleMania, but it “pales in comparison” to what you did at WrestleMania. Then they showed all of HHH’s losses at Mania. All 13 losses.

HBK said “when you see it like that you’re not that good.” Triple H asked HBK how many losses he has at Mania. HBK said “this isn’t about me, focus.”

Triple H credited the icons he shared the ring with. HBK then said everything went wrong when he met Stephanie McMahon. Triple H’s phone rang and Steph called him on Facetime. She brought up how Shawn was talking about her. She said she’s watching live right now and he’s mocking her.

Stephanie started to say: “You tell that no good lazy-eyes –” then Triple H hung up the phone. Shawn brought up Ric Flair and guess who called Triple H on Facetime? Wooo!

The Nature Boy said hi and told him not to let Shawn Michaels Superkick him at the end of the segment. Then Triple H’s phone started ringing again and Flair was crying. Then they went to commercial.

When we came back from commercial, Road Dogg was on the phone with him. He couldn’t believe that they were on the air. This segment was lasting the whole 20 minutes. Triple H said they cleared it to go as long as they want.

Then Vince McMahon himself came out just as HBK said that they didn’t even get to the Katie Vick segment yet.

Shawn Michaels said he’ll step back and let him enjoy this moment with his father in law. Vince said in normal circumstances they’d give him a hug. Vince said that most of the fans would be chanting “boring” instead of “Triple H.”

Vince McMahon brought up the Gobbledy Gooker and said that it’s not like Triple H did with Katie Vick. Then he said this performance is like “Bayley This Is Your Life.”

Then Vince said that he loves Triple H (and HBK). He also stated that Triple H’s performance tonight was god awful. He said it was “rotten.” Then Vince McMahon said “let’s wrap it up, padre.” Then Vince McMahon left and turned the lights out on Triple H and Shawn Michaels. They played “crickets” to end the show as HBK said “story of your career.”