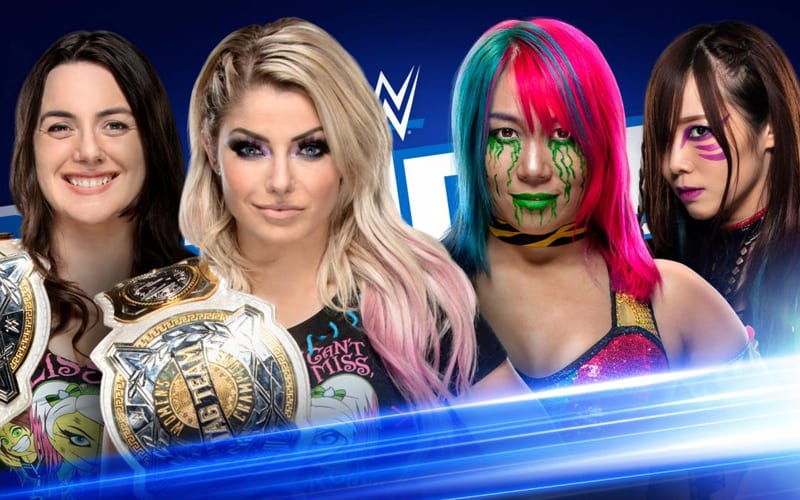 This is the first SmackDown since WrestleMania 36. WWE is filming content right now and will continue for the next several days with the purpose of nailing down content for the next month of programming. Let’s see what they have in store for fans this week.

Mandy Rose and Otis are together again. The storybook romance will enter its next chapter next week.

Braun Strowman will be on WWE RAW as well. WWE could introduce a new challenger for the WWE Universal Title this week.

We will see a WrestleMania rematch this week. Bliss Cross Applesauce will defend the WWE Women’s Tag Team Titles against the Kabuki Warriors.

What do you want to see on tonight’s show? Is there anything WWE can do to make the most of these empty arena shows? Sound off in the comments below and join the conversation throughout the show!

The Universal Monster came out and hyped his big WrestleMania win. Then Shinsuke Nakamura came out.

Shinsuke Nakamura had a microphone and Sami Zayn was not present. “This should be funny, what do you want?” Strowman asked.

Nakamura said he’s knocking on the door for an opportunity. He said “knock knock,” but Strowman didn’t say anything. “You’re supposed to ask ‘who’s there?'” Who? Shinsuke Nakamura is there. He said the last time he wrestled Braun he defeated him.

Braun said nobody tuned into SmackDown to watch him run his mouth. Then Braun suggested that he knock the crap out of him.

Shinsuke Nakamura said Braun reminds him of an old Japanese proverb “the weak are the meat and the strong eat.” Then Braun said he has his own old proverb. Later tonight he’s gonna get these hands.

Then Cesaro came in and Braun shoved him out of the ring. Nakamura kicked Braun and then he left.

Bliss and Cross are putting those WWE Women’s Tag Team Titles on the line.

Asuka took punishment to Alexa Bliss right off the bat. She stomped Bliss down in the corner and then tagged Kairi Sane for a double team move.

Michael Cole put over the Kabuki Warriors as being great champions during their 6-month reign when they hardly defended the titles.

Bliss rolled through and got a roll-up for a two count. Bliss slapped Sane, but then Kairi returned fire and tagged Asuka who took Nikki Cross out right away. Then Asuka continued beating down Bliss.

Sane hit Bliss with a dropkick and tagged Asuka back in. Alexa hit a dropkick on Sane, but Asuka went outside. Then she went around the ring and hit a hip attack. Asuka put on a headset and screamed in the mic. Nikki got on the table with her. Bliss pulled Asuka off and Cross hit a crossbody on Asuka to the floor.

Nikki took the tag sometime during the commercial break, but she immediately took to getting beat down by Kairi Sane. Asuka eventually took the tag to keep Nikki Cross from tagging in her partner.

Eventually, Cross hit a bulldog and tagged in Bliss who hit some clotheslines on Sane who also tagged in. Bliss fired up and hit her knees into backhand spring moonsault.

Sane nailed Bliss with a spear for a two count.

Bliss tagged Cross. Asuka nailed a kick on Bliss and Sane hit Cross with a spinning back fist. Asuka tagged in and kicked Nikki in the spine. Cross was soon in an Asuka Lock as Nikki fought out.

Bliss broke up the hold and Sane took Bliss out. Then Sane got back to the corner so she could get a tag and climb up top for the Insane Elbow. Nikki moved and Sane landed on her feet. Bliss got the tag and hit the DDT, but Asuka broke up the pin.

Asuka took Cross out with a knee and then Bliss nailed a Twisted Bliss on both Sane and Asuka.

Bliss went for Twisted Bliss in the ring, but Sane moved. Nikki got the tag and hit the twisting neckbreaker for the win.

Elias was on the crow’s nest again where he took that fall. He feels great about how his match against King Corbin went at WrestleMania. He has a song for us called “Walk With The King.” He said to clap along and don’t worry about your neighbors because they’ll be clapping too.

They played a video package for Otis and Mandy Rose’s WrestleMania storyline.

Dolph Ziggler came out with Sonya Deville and they were unhappy. They got in Cole’s face an violated social distancing in a big way. They demanded for the footage to be edited and they claimed that it was fake. Then Tucker from Heavy Machinery came out.

Tucky said he’s sorry to interrupt their meltdown. He said he knows he’s smitten with Otis’ kitten Mandy. Then he showed off the pictures that Mandy released earlier today.

Tucker said that he and Dolph have unfinished business and they’ll take care of it right now.

Ziggler tried to gain an advantage with some underhanded tactics. Then Tucker used his brute strength to heave Ziggler over the announce table.

Ziggler nailed a Superkick off the post and got the win.

They said that The Miz was hurt which is why he couldn’t work the ladder match at WrestleMania. Then they showed a clip from the match’s finish.

It’s good to see The Miz.

They said Otis finally kissed a girl which is good news. Then they brought up AJ Styles and The Undertaker’s Boneyard Match. It wasn’t them being buried so that’s good news too.

Miz said that Braun being champion means he’ll be on every show. That’s much better than previous champions. That’s good news too.

They had several things to tell fans that was good news. Then they performed their hit song “Hey Hey” live on the show.

Then The Usos came out to stop them mid-song.

The champs said “how dare you” when they ruined the performance. Miz wondered why the Usos were out there. Uce said that they needed to defend both titles. Miz said that wasn’t the deal at Mania.

Morrison said that he has Miz’s back and everyone else gets his front. Miz said he’s “still not medically cleared” so he can’t wrestle tonight. Then The New Day entered the empty arena.

Big E says it only makes sense to him that the other members of the teams get to compete for the titles as well. That would be Jey Uso vs Big E vs The Miz eventually.

Kofi said after consulting with several people they were informed that the match will go down next week for the SmackDown Tag Team Championships.