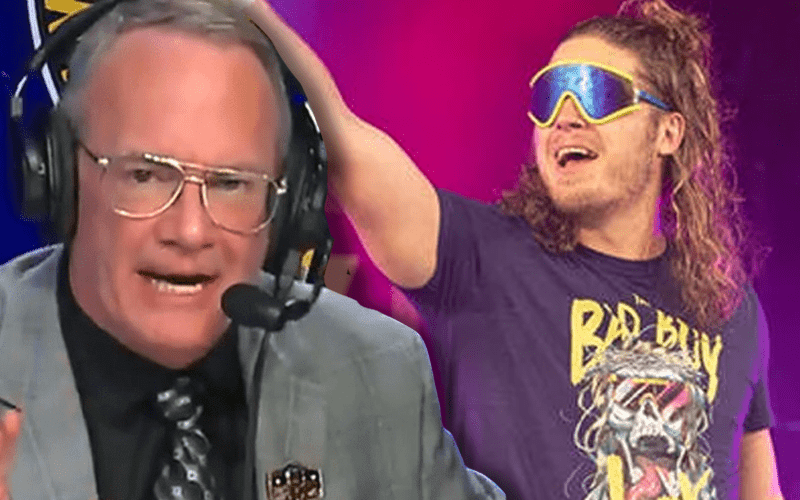 Joey Janela recently wrestled Jimmy Lloyd at a GCW event in a “social distancing match.” Both wrestlers were essentially wrestling invisible opponents, but they each reacted to the other’s move. Jim Cornette isn’t a fan.

Click here to check out that “social distancing match.”

Jim Cornette and Joey Janela are not friendly. For some reason they haven’t blocked each other on Twitter either.

Cornette commented on Janela’s post about this “social distancing match.” He said that the video looked like a lot of Janela’s work as he is attempting to play “pro rassler” in front of zero fans.

I can’t tell the difference between this & any of his other matches–a skinny goof with no talent vs. a fat goof with no talent in front of no fans performing the sloppiest, worst attempt at playing pro rassler anyone has ever seen, i.e. every time Nutella steps in the ring.

The Bad Boy saw this reply from Cornette. He might have seen it coming as he responded with: “Without fail, Hook, Line and Sinker! Caught myself a big mouthed cuck bass!”

Jim Cornette is never one to let anyone have the last word. He commented back saying that Janela has succeeded at being an “utter waste of flesh.”

So you WANT to be recognized as a complete buffoon and utter waste of flesh who excels at nothing and makes a pathetic attempt to emulate what real wrestlers do? You’ve actually succeeded at something!

This is an uncertain time in the world right now. Plenty of people are trying to make things easier and entertain fans including Joey Janela. Apparently, Jim Cornette didn’t see the entertainment value in Janela’s social commentary.