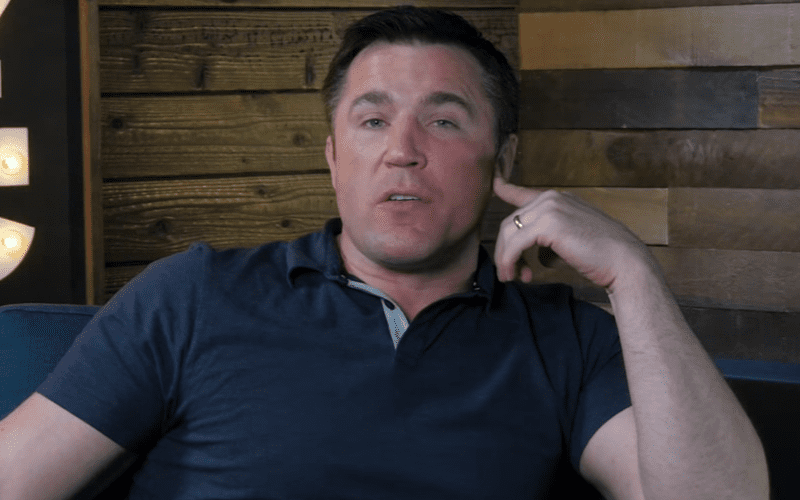 WWE is doing their best to continue providing content for fans through the coronavirus pandemic. Former UFC fighter Chael Sonnen wasn’t a fan of what they did at all.

Sonnen released a YouTube video where he picked RAW apart. He called the show garbage and said that the Superstars looked ridiculous.

He did say “good for them for pushing forward,” then Chael Sonnen continued to discuss how bad the show was this week.

“Who here watched Monday Night Raw? Now I got to tell you, my fandom of professional wrestling is grossly overstated. I don’t know the last time I watched Monday Night wrestling, it has been rotten garbage for such a period of time. The last show that I ever saw I saw live, they came to Portland and I actually went. So I haven’t seen it on TV in a period of time, but I watched on Monday and I watched on Monday because my phone was lighting up with people telling me ‘hey you got to turn this on, this is the worst thing I’ve ever seen on TV.’ And I’m going ‘I don’t know if you could make Monday Night Raw any worse than Monday Night Raw has already made itself…but I’m in.’ I’m the guy that will look at a train wreck…that’s true, I’m the guy who logged on and watched Joey Diaz’s podcast because Front Row Brian sent me a text and said ‘Joey Diaz just fell asleep while filming his podcast.’ So I turned it on and watched Joey sleep and snore for two hours just because I wanted to see if Joey was ever gonna wake up.”

“At any rate, I had a very similar experience watching Monday Night Raw. This was so bad, now I have to tell you…good for them for pushing forward…good for them for doing their best and bringing a level of entertainment…absolutely. But here was the mistake, they ran this out of the NXT training center. This place is state of the art, from sound to lights to the ramp to the ring to the built in seats…just an absolutely beautiful arena. Let me ask you guys this before I go any further, how do you think it would be produced? How do you think it would be presented to the audience? If you were the producer, how would you present it? Let me tell you what most of your answers were, most of your answers were I would’ve either dropped a curtain around the whole thing and blocked it off and put all the lights up right over the camera and the action. I would have done what is called shooting tight, or I just would’ve blacked out the arena, put the lights over the ring and filmed it that way.”

“There is boxing events that I could name, there is MMA events that I could name right now where they will over dark an arena. I don’t agree with their lighting package, it will be a sold out arena and it will look like nobodies there because all you can see is the lights that happen to be on the apparatus…the ring or the cage. I don’t agree with that, but there are ways to do it that are happening right now and that’s with twenty thousand people live. The WWE, for reasons that are never going to be understood by me, decided to light the arena the exact same way. The same lighting that was on the ring was the same lighting that was on the first row, second row and the twentieth row. They did not dim it in the least, they steered into the fact that nobody was there…it looked ridiculous.”

“I had no idea until watching this rotten piece of garbage, I always assumed the performers were the star of the show. I now know it’s the fans, if you have no fans at a wrestling event…you’re in a hard spot. So the performers would come out and we get this wasn’t their fault and this was everybody’s first time. This is one of the problems you have with live TV, I’m only voicing it to you because there was a lesson to be learned here and I’m hoping this was learned. It looked as though that this was a dry rehearsal, now it’s okay and it’s gonna be a success in the long run. If for Wrsetlemania, by example they’re gonna run out of this exact same training center and only stream it live with absolutely no audience. If they used this disaster known as Monday Night Raw as a dry rehearsal for Wrestlemania and they dim the damn thing and they let the action be fully on what’s happening in the ring, they’re going to be okay.”

To be fair, Chael Sonnen did start out his video by saying that WWE “has been rotten garbage” for a while. He wasn’t watching as a fan. What WWE was able to figure out for RAW this week still obviously didn’t impress him.