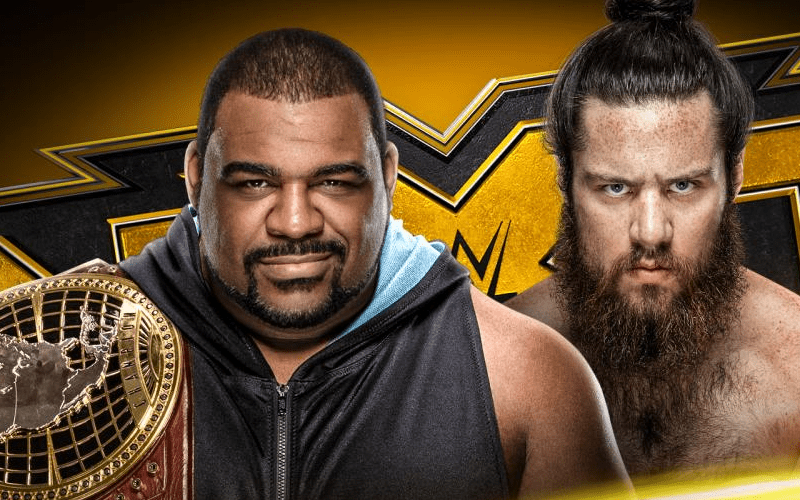 Welcome to Ringside News’ coverage of WWE NXT this week. We’ll get started at 8:00 PM EST when things get started.

Tonight’s NXT will be a special edition of the show. A fan appreciation night is slated for the WWE Performance Center.

NXT has a few weeks to plan for NXT TakeOver: Tampa on April 4th. The news just broke that Tampa is still planning to allow WrestleMania to proceed as scheduled.

You can click here for a detailed run-down on what to expect.

We’ll have two title matches and Dakota Kai vs Mia Yim was also added to the show. Check out a bullet point list of what to expect below:

Recap video from last week was played. They’re in the WWE PC this week because Full Sail was already booked for a Hall Of Fame deal they do every year.

They got off to a slower start while they felt each other out and people chanted “Keith Lee.” Lee showed his power and kept pushing Grimes away.

Cameron kept coming at Lee and trying to lift him up. They made their way outside and then Grimes kicked Lee as they were coming back in and he hit a somersault flip off the apron.

Grimes avoided being powerbombed and then Lee caught him off a dive and clotheslined him off the apron. Grimes hit a crossbody off the top and Lee wouldn’t let the pin happen as commercial started.

Later on, Grimes tried to suplex Lee, but it didn’t work. Then Lee nailed a cross body block that took them both out. Grimes nailed some superkicks and a suplex for a two count.

Grimes nailed a DDT for a two count he hit another superkick. Then Keith Lee nailed his finisher and won.

As Keith Lee was celebrating, Damian Priest hit him with a pipe. Then Dominik Dijakovic showed up and ran Priest off. After that, Keith Lee hit Dijakovic with a spirit bomb.

Winner of this one gets in the big ladder match at TakeOver: Tampa.

The got started quick with some fast roll-up pins for two counts.

Raquel Gonzalez was at ringside as these two fought on. Yim was taken off the apron and dropped on her face as they went to commercial.

Kai and Yim got to their feet and Yim hit a couple of clotheslines. Then she dropkicked her into the corner and hit a cannonball.

Kai hit a devastating back move and got a two count. Dakota Kai wasn’t happy at all. Then Kai started kicking Yim in the face. Yim dodged a kick and got a roll up for a two count. Yim ducked under a running kick to the corner and powerbombed her down, but Gonzalez caused a break of the count and then he kicked her out of ringside.

Yim hit a Codebreaker and won.

Then Gonzalez got in the ring and destroyed Yim. Mia Yim got a bunch of chants as she left.

Tommaso Ciampa was shown arriving. He didn’t want to talk.

They got started and eventually made their way out of the ring for a bit. This was a fast paced match as they return to the inside and Mendoza hit a brainbuster and a flipping splash for a two count.

Kushida his some forearms and a chop before landing a back elbow and a kick. Mendoza shook off a DDT attempt, but Kushida landed a dropkick to end the sequence.

They continued on and Kushida eventually caught him with an armbar and got the submission win.