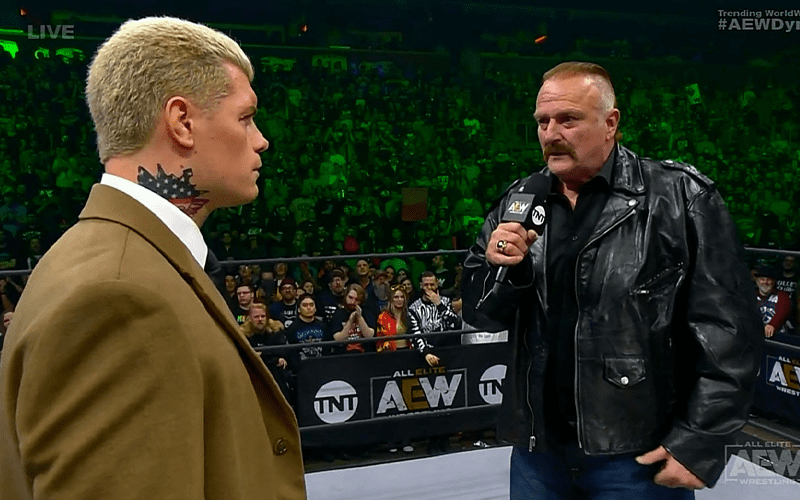 AEW has some big things in store. WWE Hall Of Famer Jake “The Snake” Roberts showed up this week and he’s not coming alone.

Click here for our complete AEW Dynamite from this week.

Cody Rhodes came out and invited MJF to come and face him in the ring. He said the only thing that would make him accept the loss at Revolution is if MJF can tell him that he lost fair and square.

Suddenly, Jake “The Snake” Roberts came out instead. He received an amazing ovation from the Denver crowd. Roberts said he was tired of hearing Cody crying. He said that MJF handed Cody his ass, but that’s not why he’s there.

Roberts said he’s not there to praise him, he’s here to slay him. Then Roberts said that he has a new client coming and he will bring the dark side to AEW. He said it took 20 years to get clean and to get right and “by god, I earned it.”

Then Roberts said that if we think for one minute that he’s going to be nice and play right then we have another thing coming. He brought up the snake and how he used it as a diversion back in the day. He will be on the outside of the ring when his client faces him. Cody can even “bring that one trick pony Arn Anderson.”

He called Cody “Caesar” and said he’s not in AEW “to take the whole pie, just your share.”

Then Jake Roberts said that a wise man said to never turn your back on someone you respects or are afraid of. Jake “The Snake” Roberts left as he turned his back on Rhodes.