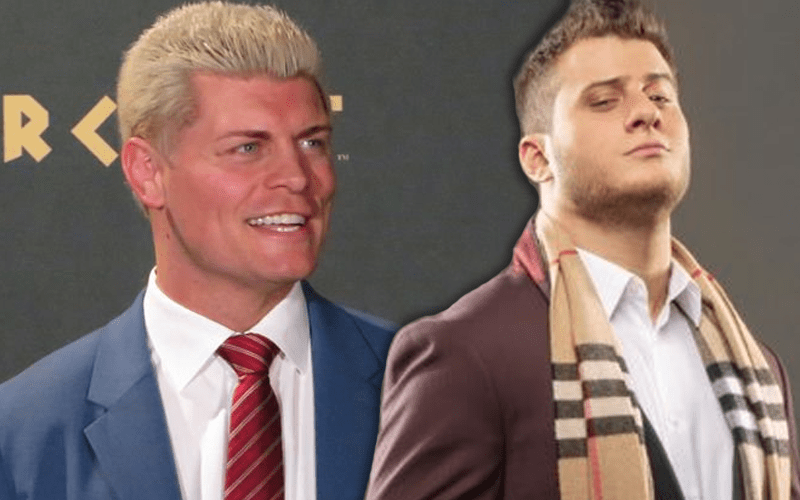 MJF is a heel on television and he’s not going to stop being a jerk just because someone paid to meet him. A young child recently learned this the hard way when MJF gave him the finger.

One fan tweeted out to let everyone know how much MJF upset his son. This young pro wrestling fan was very excited to meet AEW stars at C2E2, but the little guy ended up with a middle finger in his face which caused him to cry.

A video was taken and memes were soon made of MJF with his middle finger in a crying child’s face. That upset this father for understandable reasons.

my son & I are big fans of #AEW we order #AEWRevolution & my little guy was all excited to go to #C2E2 the very next day to see some of the wrestlers the first we saw was MJF, you may have seen the pic &/or video going around that is me & my son that when he flips him off

I tried to laugh it off knowing he’s just in character & @JANELABABY was great helping to calm my son down but it really upset him I know that’s his gimmick but he’s only 7 & doesn’t understand, his eyes would tear up & he didn’t too far flipping him off now there’s a video & people making memes to make fun & I don’t like that as a parent I hope you guys can understand & tell him to calm his antics down in front of kids

Cody Rhodes tweeted back at this fan and said that he’ll make it up to him. Then he excused MJF’s actions because apparently you get what you get when booking the Salt Of The Earth.

Hey Tom! I’ll make it up to you. You near any of the cities we are visiting soon?

DISCLAIMER: if you have a meet/greet or inquire media wise for MJF, you’ll get MJF. Talent have freedom of expression, so please don’t think anybody is going to act any different than they do on tv

AEW is letting their stars paint with their own numbers. This is great, but sometimes it might not be the best idea to give a kid the middle finger because not everyone lives in the pro wrestling bubble. It certainly wasn’t something this young fan expected.

MJF has appeared on a couple of talk shows and made headlines because he upset the hosts. He’s not likely to stop this behavior and it sounds like the company is defending him. It just makes us wonder if a line exists that MJF shouldn’t cross.

Cody deleted his tweet, but you can find a screenshot below.