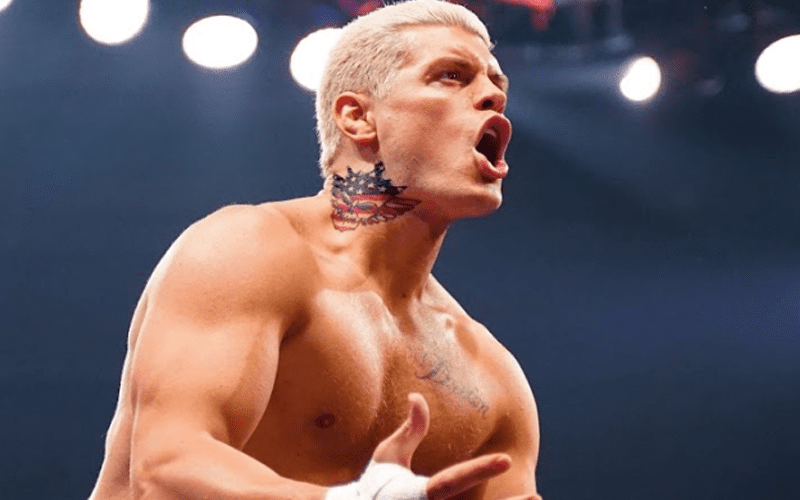 Cody Rhodes revealed a big surprise for AEW fans when making his way to the ring at Revolution. He was sporting a big neck tattoo. A lot of fans didn’t like this addition to the American Nightmare’s look. Some even took action.

A Go Fund Me page has been started to get Cody Rhodes’ tattoo removed. They are nowhere close to their $10,000 goal, but Brandi Rhodes did seem to chip in five bucks. You can read the description below.

Cody just unveiled a horrible tattoo on AEW Revolution. The tattoo clearly was a major factor in him losing his match against MJF, and it’s just really really ugly. I’m sure Cody is embarrassed and probably regrets it.  Let’s raise some money so Cody can afford to get it removed.

Another person who appears to have donated to this fund is Jim Cornette. We can only hope that Cornette really donated to this cause. The “James Cornette” who donated commented on the post as well.

It would have been less of a turn-off if he got Dusty’s birthmark tattooed on his stomach. It’s like a Bomb Pop nutted on Bart Simpson’s face. Give Hangman a bullrope! His action figure has one! Moxley’s looks like Christian Bale’s Machinist.

It’s not likely that Cody Rhodes will get rid of his new American Nightmare tattoo. Fans will have to get used to it. That’s what happens when nobody thinks to make a rule about not getting huge image changing tattoos in the middle of an angle.