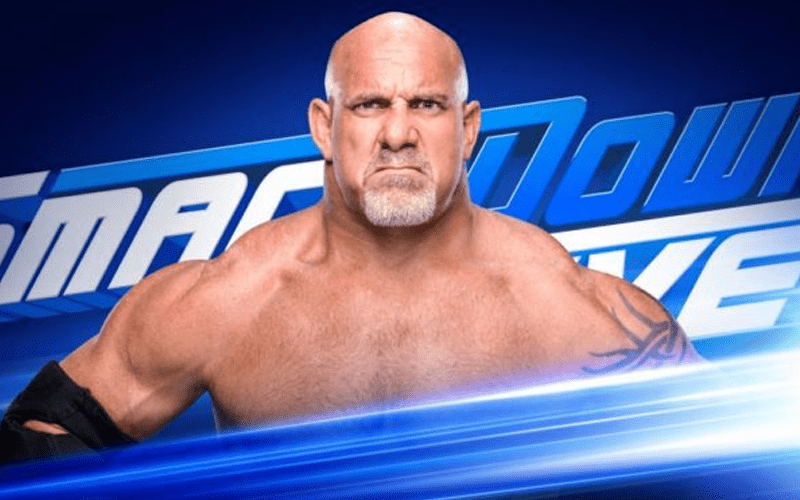 Tonight is the final episode of WWE SmackDown before Super ShowDown next Thursday. That is why Goldberg is showing up tonight. We know that The Fiend is next. Let’s see if he wins the title.

Goldberg will be here and he’ll likely have something to with The Fiend. The Bella Twins are also going to be on a Moment Of Bliss. This is quite a loaded show with big draw guests.

Naomi and Carmella will face each other to see who gets to face Bayley in Saudi Arabia next week.

An 8-man tag team match is also slated with The Usos and The New Day vs Dolph Ziggler, Robert Roode, The Miz, & John Morrison.

Also, Otis got his heart broken by Mandy Rose last week as Dolph Ziggler ruined Valentine’s Day. Let’s hope they follow up on that.

Jimmy and Jey came out wearing their hilarious new shirts.

Morrison came out and he said that Ziggler had a good Valentine’s Day referencing the Otis and Mandy Rose angle. Their new catchphrase is: “Be Jealous.” Then Roode and Ziggler came out to start the match.

This was a fast-paced match with the Usos taking control with Kofi early on. Big E remained on the apron. Morrison took out Kingston and then Miz hit a boot on the outside.

Then the heels took control as Kofi sold. Morrison took the tag and hit an elbow for a two count. Roode took the tag next and slowed Kofi down more with a rest hold. They triple team choked Kofi in the corner while the referee was distracted.

Kofi continued to take abuse and they sent him to the outside as SmackDown went to commercial.

Big E finally got the hot tag and he sent everyone around ring. He planted Miz with a third slam and a big slash. The Miz avoided the Big Ending. Morrison took the tag and he hit a knee to Big E’s face as he was trying for a spear through the ropes. Big E slammed Morrison down for a two count.

Morrison hit a shining wizard and a shooting star for a two count as Kofi broke up the pin. Kingston sent Miz to the outside and Morrison hit a springboard corkscrew on him.

They traded roll-up near falls and then Ziggler hit a spinebuster/Zig Zag with Dolph for a two count. Ziggler ate a superkick and so did Miz as Cole said “Superkick Party.” Roode went for a Glorious DDT, but the Uce kicked him too for a three count.

Winner: The Usos & The New Day

Daniel Bryan was backstage. Drew Gulak offered to show him a PowerPoint presentation about all the things he’s doing wrong. Heath Slater heard his name and he wanted in on the conversation. He said that Daniel made his kids cry a few weeks ago and “nobody makes my kids cry but me!” He wants another match. Then Daniel walked off and said that maybe Gulak can help him.

They played a promo to get any new viewers up to date on their angle. Last week was heartbreaking.

Mandy and Sonya were backstage. Tucker walked up and he wasn’t happy. “Mandy, you hurt my boy.” He asked her about inviting Ziggler to her date. He said he’s never seen Otis so hurt and he hasn’t even leaving his hotel room tonight.

Tucker asked about a text saying that she was running late. Mandy asked “what text?”

Tucker said he was a fool to ever think she had good intentions. Huge “Otis” chants broke out. Mandy said that had a good time with Ziggler as Sonya seemed to encourage her to choose Dolph instead.

Renee Young interviewed Evans. Royal Rumble was a hard loss, but as a Marine she’s not going to stop until the mission is accomplished.

Young brought up how Evans used to call everyone a “nasty” and Evans said it has many meanings including a term of endearment. She did admit to being a bully in the past. She said her granddaddy always told her “if your pin stinks you’re probably the pig.”

Evans said her sights are set at the Elimination Chamber. She wants to defeat 5 other women and get that title match.

Musical instruments were set up all around the ring. Everything was fair game to become a weapon.

Elias came out and he was super over. It makes you wonder why WWE has him booked to face John Cena unless Super Cena turns heel.

He played song called “Song For The Symphony.” The falls count anywhere. Let’s blow the roof off again as I introduce my partner the Monster Among Men.

Braun came out carrying a stand-up bass over his shoulder, and he had the IC Title around his waist.

This was a tag match even though it’s falls count anywhere.

Shinsuke and Elias started out and Elias took control with chops and a hip toss. Shinsuke brought in a tambourine and Elias used it on him.

Nakamura landed a couple of knee strikes and a knee drop. Nakamura rolled outside. Then Elias got a kick drum. Braun put the drum around Cesaro and punched him out.

Zayn tried to hit Strowman with his ukulele and then Braun went running after him right into a kick from Nakamura.

The heels had control when we came back as Cesaro worked on playing some cowbell. Then Elias hit Cesaro with the cowbell. Nakamura kicked him and Elias went through a table after Zayn distracted him.

Strowman mowed over Cesaro and then he hit Shinsuke. He sent Cesaro over the announce table and turn his attention back to Nakamura who took a head-shot off the steps and then Braun threw him into a barricade. Braun stopped Cesaro from hitting him with a guitar and he choke slammed him on the apron.

Braun picked up the guitar and then looked at the stand-up bass. He went for the bass and Zayn nailed him with a keyboard. Cesaro and Cesaro hit a double suplex through the standup bass and they covered him for a two count.

Elias grabbed a horn, but Nakamura stopped him and he hit him with a kick and a gong mallet. Then Nakamura went into the gong as Elias moved. Elias threw Cesaro into the post and smashed him with a guitar.

Then he sat Cesaro on a table and climbed up top. Zayn tried to stop him, but Braun sent Sami over the announce table and then he hit a powerslam on a baby grand piano on Shinsuke for the win as Elias hit an elbow through the table on Cesaro.