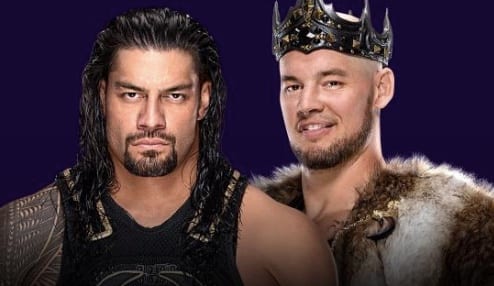 As seen on Sky Bet, the betting odds for Roman Reigns vs King Corbin at WWE Super ShowDown have been released.

There was a big feeling of ‘here we go again’ when it was announced that Reigns and Corbin would be squaring off for what feels like the 100th time. The two men have gone back and forth for months now, with The Big Dog getting the better of the King more often than not.

Now, at Super ShowDown, it appears as if we’re going to get one final blowoff match – with the bout being set to take place inside of a steel cage.

In terms of the odds, it’ll come as no surprise for fans to learn that Roman Reigns is the 2/7 favorite to win the match. Corbin is the 5/2 underdog with many believing that the only shot he’s got is if ‘The Fiend’ Bray Wyatt decides to interfere in the bout.

While it seems odd for a champion to go after the challenger before a challenge has even been made, we do think Wyatt vs Reigns is the direction that WWE is going to be heading in as we gear up for the showcase of the immortals in Tampa, Florida.

Nobody really knows what sort of direction Corbin will be heading in regardless of whether or not he wins this match, but it doesn’t feel like he’s going to be featuring in anything that’s quite as important as his bout last year against Kurt Angle which saw him retire the Olympic Gold Medalist.