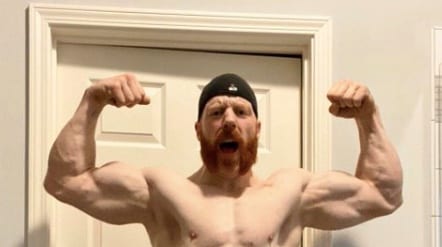 At the age of 42, we’d all hope and pray that we can still look the same as we did when we were 22 – or potentially even better.

The reality is that it doesn’t exactly happen all too regularly, but when you’re a WWE superstar, you simply have to keep yourself in shape no matter what.

Someone who has been able to do that successfully is none other than Sheamus who recently made his return to WWE programming.

He’s been a featured member of the main roster for well over a decade now and despite already winning multiple singles and tag team titles, The Celtic Warrior is still just as passionate and just as determined to succeed at the highest level in WWE.

His win over Shorty G seemed to give him a much needed boost in the eyes of the WWE Universe, and it seems like this is only the beginning.

We all know that Sheamus has been a favorite of the higher-ups for many years now, especially Triple H. His work ethic speaks for itself and he could quite easily be inserted into the mix in the world title picture.

The idea of a Sheamus vs Drew McIntyre feud is certainly intriguing, and at this point in their respective careers, it seems like it’d be a huge missed opportunity if they didn’t at least test the waters with it.

Either way, props go to Sheamus.