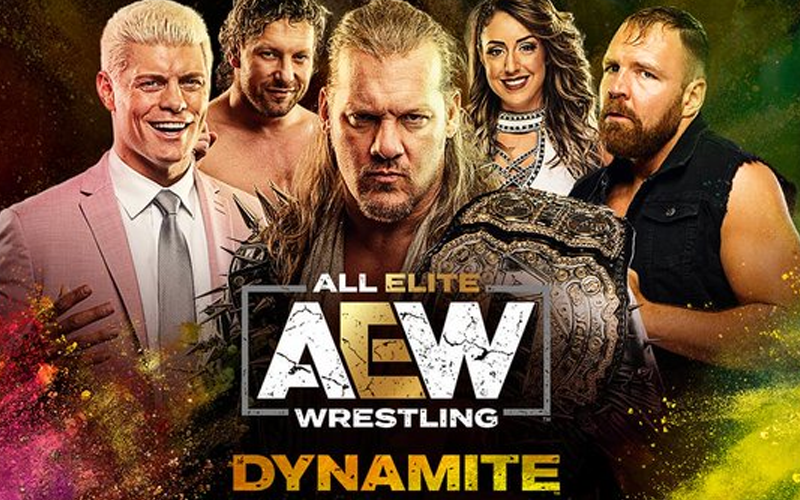 Last week AEW Dynamite took part on Jericho’s cruise ship. That show saw Kenny Omega and Hangman Page win the AEW Tag Team Titles from SCU. While they are not scheduled to be in action tonight, The Young Bucks will be taking on The Butcher & The Blade. That’s relevant because The Bucks are liable to get title shots pretty darn soon, and their buddy animosity with Hangman Page could boil over.

Elsewhere tonight, Cody Rhodes will face Kip Sabian, Jericho will team with Santana & Ortiz to face Darby Allin and Private Party, and Jon Moxley will be in action. Let’s hope we get some more storylines ramping up tonight because we’re less than a month away from AEW Revolution.

This weeks show opens with a look back at the show last week, in which The Young Bucks attacked MJF and threw him in a pool, and Kenny Omega and Hangman Page won the tag team titles.

Feeling like it’s gonna be a @JonMoxley kind of night! #AEWDynamite #AEWonTNT pic.twitter.com/XNlE5zpU3S

Jon Moxley makes his way to the ring, wearing a proper eye patch now. He says it occurred to him when he was stabbed in the eye that the fun and games with Chris Jericho are over. He says Jericho is the last obstacle in his way to the top of the mountain. But this isn’t just a wrestling match and everything that means, it also means The Inner Circle.

Moxley says that Chris Jericho is the kind of man that hides behind Jake Hager, stole Rey Mysterio’s mask, and even punched a woman. He says he is no saint, and he doesn’t wear a white or black hat, but he can look himself in the mirror at the end of the day. Because all your money and Championships don’t mean anything if you don’t have honor. Moxley says he doesn’t know what Chris Jericho sees when he looks in the mirror; a coward and a bully. And boy does he hate bullies. Mox says that, at AEW Revolution, he will have a gun pointed at his face but he won’t look away, he will stare down the barrel, he won’t blink, and he will take the AEW Championship. He says he knows he has to wait until February 28th to take that title, but he doesn’t want to wait that long to kick Jericho’s ass, so he wants him to come out now and take his beating like a man, for once.

The AEW Champion, Chris Jericho, comes out to the stage with the fans singing his theme music. He starts off by calling the crowd idiots, and says it makes him laugh to hear Moxley talk about what’s he done in AEW and what he’s earned. Because all he has earned was a spike in the eye. He says Moxley looks like a cracked-up version of Jack Sparrow. Jericho says he saw Jon’s mother backstage earlier and she was looking very fetching, maybe he’ll call her up later. But he approached her and told her why he attacked his eye the way he did; that it was all Jon’s fault. Jericho asks if they want to see them fight tonight and the fans cheer, so he tells them to go to hell. He says Cleveland doesn’t deserve to see Le Champion in action. That said, he doesn’t travel alone.

Out come Santana, Ortiz, Sammy Guevara, and Jake Hager. Moxley says Jericho thinks he has him outnumbered 5-1. However he was born and raised here in Cleveland, so the way he sees it is that it’s the five of them against this entire arena. Moxley takes off his jacket and makes his way out of the ring.

Jericho says that Moxley is as dumb as he looks. He says the five of them could beat the $hit out of him, but they didn’t come alone either. Santana and Ortiz brought some “thug” friends from the Bronx, and out come five guys dressed like Santana and Ortiz. Jericho says it’s 10-1, and he fancies those odds. So The Inner Circle make their way down the ramp and Moxley headbutts Santana, then hits a Paradigm Shift on the ramp. The rest then attack Moxley but officials quickly run down and separate everyone.

Is @JonMoxley mad enough to jump right into the middle of a 1 vs. 10 brawl?

Why, yes. Yes, he is. Thanks for noticing! #AEWDynamite #AEWonTNT pic.twitter.com/tEXr4Szl5V

We see a video of MJF in a meat packing facility where we expected to believe The Butcher and The Blade work for a living. MJF hands them a letter with “The Young Bucks” written on it and money inside. Good God that was dumb in so many ways. The Butcher, The Blade, The Bunny, Wardlow, and MJF make their way to the ring.

The Young Bucks Vs. The Butcher & The Blade W/The Bunny, MJF & Wardlow

We start the match with The Butcher and Matt Jackson. Matt can’t get Butcher down, so he rolls under a lariat and tags Nick. With the help of his brother, then drop Butcher, who tags Blade. Matt and Nick make use of quick tags to keep control of Blade and hit him with repeated axe handles and such. They hit a double dropkick but The Butcher comes back in and drops them both with a double clothesline.

Matt avoids Butcher and slides out of the ring, where he dodges The Bunny, slides back in and tags Nick. Jackson delivers a kick to Blade but gets one right back. Nick jumps onto the apron and superkicks Butcher and readies for a springboard but The Bunny pulls him down. The Butcher hits him with a running body attack, while The Blade dives over the ropes onto Matt.

We’re back live and The Butcher is destroying Nick Jackson. He hits a gutbuster and throws him to Blade, who hits a Doctor Bomb for a pinfall but Matt breaks it up. Blade lifts Nick but gets punched back, and inadvertently knocks Butcher from the apron. Blade prevents a tag but only for a second.

Matt Jackson leaps in with a crossbody, followed by lots of right and left hands. He jumps out of the ring and kicks Butcher down, then gets on the top rope and hits a Macho elbow to Blade for a near-fall. Nick tags back in and hits a senton to Blade while Nick holds him up using the ropes. The Butcher comes in and tries to hit a double clothesline but instead finds himself at a superkick party. The Bucks hit the Meltzer Driver for the win.

The Butcher and Blade start attacking Matt and Nick after the match, so out comes Omega and he hits a V-Trigger to Butcher. Hangman Page comes out behind him with a beer and hands it to Matt Jackson to hold, before hitting Blade with a Buckshot Lariat. Page takes his beer and leaves. MJF is not happy.

The bell rings and Big Swole spends the first minute just avoiding strikes from Rose, before deliver a few punches and a basement dropkick. Rose drops her with a clothesline, then hits the ropes but a sloppy dropkick from Big Swole knocks Nyla from the ring.

Big Swole looks for a soccer kick on the apron but gets swiped down. Nyla sends Swole into the barricade. Big Swole tries to fight back and starts punching Nyla against the ring post but Nyla ducks and she punches the steel. Nyla attacks the hand as we head to the break.

Back live and Rose misses a splash in the corner. Big Swole jumps on her and applies a guillotine. Rose punches her and shoves her off, but Swole delivers a head-kick to drop her. Swole lifts Rose and headbutts her, then hits a springboard cutter for a near-fall.

Big Swole hits a rolling flatliner, then looks for a discus punch but Nyla hits a spear. Nyla lifts Swole and hits a sit-out powerbomb for the win.

Kip Sabian makes his entrance alongside his girlfriend, Penelope Ford. His opponent, Cody, is out next with his enforcer.

The match begins and Sabian runs across the ring and dropkicks Cody into the buckles. Kip hits a gutbuster, then unloads some right hands. Cody reverses a back suplex and hits a drop-down uppercut and knocks Sabian from the ring.

Kip gets in the face of Arn Anderson and shoves him. Back in the ring and Cody takes a waistlock. Cody whips him to the ropes and hits a dropkick and again Kip rolls from the ring. This time he pulls Cody out with him. Cody inadvertently hit Penelope Ford and she’s out. Cody lifts her up but Kip hits him with a running kick and Ford walks off smiling.