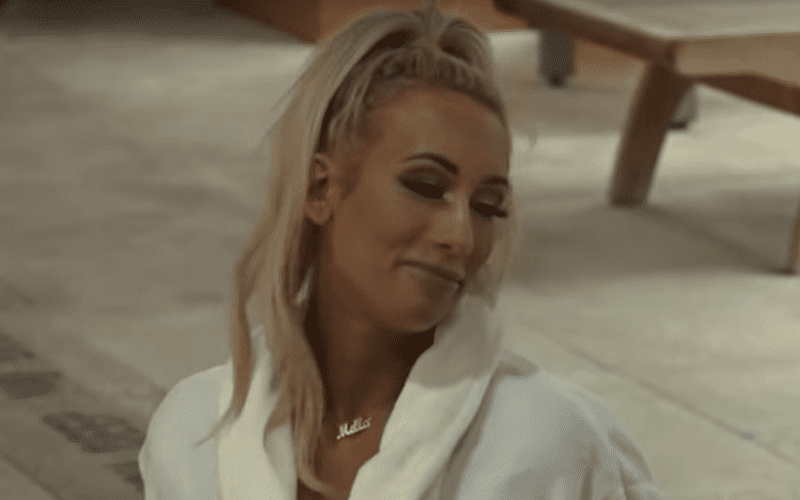 Carmella is a former SmackDown Women’s Champion, but she hasn’t been seen on television much recently.

She was on television practically every week with R-Truth during their partnership, but that changed when the draft separated them.

Mella recently spoke to Newsweek where she revealed that she’s not worried about being off WWE television. She realizes that it all comes in waves and it’s just not her time right now. It will be her time soon enough and that could include the Royal Rumble.

“I think you have to take a step back and be like, ‘Man I’ve been booked week after week, and I’ve been on TV since I’ve debuted.’ I’ve been involved in a story, and this is the first time that I haven’t been involved in a story, and it’s OK. Obviously, it’s social media and I’m playing it up, I’m joking around. When you see ‘We want Carmella,’ I have to joke around with them. Would it be nice to be in a story? Yes. But I also don’t want to be thrown in a story that doesn’t make sense. I want to make it impactful, so I have to remember that.”

“You know, you also don’t want to be shoved down the fans’ throats either. The fans are smart and they realize ‘they want us to like this person, so we’ll rebel against that.’ So it’s more about making it organic and making it work and fit. And right now it’s just not my time, but it will be again. I’m not worried about that. I just have to take a step back and enjoy the breaks that we rarely ever get. That part I’m enjoying.”

We’ll have to see when Carmella appears once again. She was a babyface during her last run, but Mella can also make money as a heel.