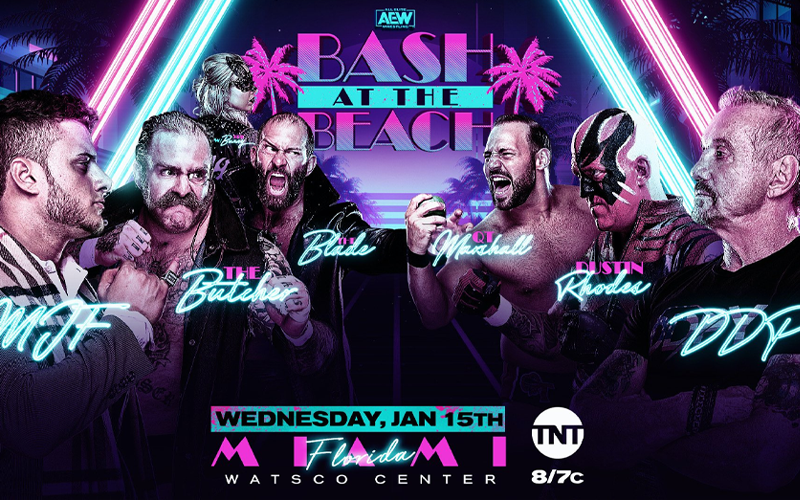 Tonight’s show will be themed around Dusty Rhodes’ brainchild PPV, Bash at the Beach. That means we’re getting some surfer vibes, along with a pretty stacked card. The biggest match of which is the four-way tag to determine the number one contenders, featuring Adam Page & Kenny Omega, Proud & Powerful, Best Friends, and The Young Bucks. This will no doubt be a typical high-octane AEW tag match that blows your mind before you have a second to think about logic or selling.

Another tag match tonight sees the 63-year old Diamond Dallas Page come out of retirement to team with Dustin Rhodes and QT Marshall. Their opponents will be MJF, & The Butcher & The Blade. I’m personally not a fan of AEW’s multiple-stories-at-one-time-to-prolong-feuds thing, I just think it’s silly to have Cody in mini-feuds with The Butcher & The Blade, as well as Darby Allin, while really mad at MJF. Yet Cody isn’t even in this match, but QT Marshall is, go figure.

One man who doesn’t have multiple feuds at any given time however, is everyone’s favourite renegade, Jon Moxley. Last week Moxley feigned joining The Inner Circle in a fun, albeit predictable, segment, before smashing Jericho with a bottle of the bubble. Tonight he faces Sammy Guevara, but you can bet The Inner Circle will have more in store.

And the other matches tonight include PAC Vs. Darby Allin, and Awesome Kong & Mel Vs. Hikaru Shida & Kris Statlander, while Cody will answer MJF’s challenge after being told to wait a week by Arn Anderson. And that’s the preview for tonight’s show.

Bash at the Beach opens with a graphic for Rocky Johnson, who unfortunately died earlier today.

We cut to the arena, where Jim Ross gives AEW’s condolences to the Johnson family, and also mentions a few other losses this past week.

The match begins with Trent and Nick Jackson. Nick attempts a shoulder block but Trent doesn’t move. So Nick tries again, then again and then Trent hits the ropes and drops him with a shoulder of his own. Nick catches Trent with a springboard arm-drag, then ducks a few clotheslines and feigns a superkick.

Tags are made to Adam Page and Chuck Taylor. Page takes a headlock but gets shot off and hits a fallaway slam. Matt Jackson and Kenny Omega tag into the match and the fans chant for Kenny. They lock-up but Santana and Ortiz storm the ring and beat them down. Santana tags in and forearms Kenny Omega, then chops the chest and tries to punch Nick Jackson on the apron but gets punched back.

Kenny hits a backbreaker on Santana and Nick hits a dropkick to him. Nick and Kenny hit a few double team moves, then Matt comes in for one as well and The Elite are standing tall. Ross mentions that the referee is doing nothing to stop everyone from getting involved. Matt and Nick attack Trent with a double team dropkick, Matt is legal now and he hits four northern lights suplexes. Trent comes back with a tornado DDT and tags Chuck Taylor.

Taylor hits a belly-to-belly to Nick, then catches the incoming Matt with a sliced bread. Ortiz runs in and Taylor throws him from the ring. Trent tags Chuck and they hit half-and-half to Nick Jackson, only for Santana and Ortiz to attack them and clear the aprons. They hit Matt with some fast-paced double team moves, then hit dives to everyone else on the outside of the ring.

Santana hits Matt with three amigos, then lifts him for a vertical suplex and tags Ortiz, who takes the suspended Matt and finishes the suplex. Matt finally comes back with a stunner from the middle rope to Santana, then tags Kenny Omega because Nick wasn’t on the apron. Kenny comes in and hits Ortiz with a snap dragon suplex, then one to Santana. Trent tags in and looks for a tornado tag but Kenny counters with the snap dragon suplex.

Hangman tags in and hits a double-team sequence with Kenny, before hitting a moonsault to Proud & Powerful on the outside. Kenny looks to make a dive himself but he gets dragged from the ring, then Santana dives onto him and Page. Nick Jackson looks to dive but Trent stops him, only to get hit with a facebuster. Taylor and Matt hit dives to the outside, then Trent takes Nick to the top rope and suplexes him onto everyone at ringside.

Back in the ring, we get an eight-man suplex situation, with neither side able to life the other up – the referee got knocked down with a foot, despite this being a no-DQ match. Orange Cassidy comes in to help Best Friends and Proud & Powerful get the big suplex. The referee gets up and sends Cassidy from the ring, meanwhile Best Friends hit piledrivers to Hangman and Omega. Trent lifts Kenny and they hit Strong Zero but the Bucks break the pinfall.

Taylor trades hands with Matt Jackson, then Hangman comes in and drops him. Trent drops Hangman with a lariat, then Ortiz pokes Trent in the eye. Santana and Ortiz double-team Trent, then Nick Jackson superkicks Ortiz. Nick kicks Santana in the corner, then looks for a hurricanrana but Ortiz counters with a Liger Bomb. The Bucks then come together and superkick everyone. They look for the Meltzer Driver but Trent shoved Nick to the floor and he moonsaulted Santana and Ortiz.

Hangman tags in off of Matt, who isn’t happy. Taylor sends Nick from the ring, then Kenny hits Chuck with a V-Trigger. Hangman and Omega hit the V-Trigger/Buckshot Lariat combo for the win.

The Bucks aren’t happy with Hangman after the match. They talk to Omega and point the finger at Hangman, who leaves alone.

Cody comes out in his best Tommy Vercetti outfit to address the situation with MJF.

For one night only, I really wish @CodyRhodes was played to the ring by Jan Hammer’s Miami Vice theme. #AEWDynamite #AEWonTNT pic.twitter.com/x76WMVOHV2

Cody says he came out a few weeks ago with his usual self-righteousness and asked MJF to name his price. And he did, and his price is rather expensive. Cody shows us a graphic on the screen, in which he can’t touch him until the Revolution PPV, he must take 10 lashes on TV, and he must have a cage match against Wardlow.

Cody says that the cage match could very well soften him up ahead of the PPV. Although he thinks that MJF should be worried because perhaps when Wardlow takes off his suit everyone will realise MJF should be carrying his bag. Cody then says MJF wants to whip him and he gets that, but if MJF thinks a bloody back is the worst thing that can happen during this feud then he is sorely mistaken.

He then says that MJF is a privileged man who found something he is decent at in pro wrestling. Cody says MJF gets a big head because a lot of old wrestlers say he is an old-school heel, because he does things differently and doesn’t do what everyone else does, but that’s because he can’t do the things they do. So yes, he accepts not touching MJF until Revolution. And he accepts the 10 lashes on live TV. And he accepts the cage match against Wardlow. Cody promises to give MJF a scar come Revolution.

Joey Janela cuts a promo in which he calls out Kip Sabian and Penelope Ford for attacking him last week. He says he get to them eventually, but next week he faces Rey Fenix and he will show why he’s a bad boy.

Brandi Rhodes comes to the ring with Mel and Luther. Kris Statlander is out second and they attack her before her partner can enter the arena.

Mel and Shida start the match and the bigger woman beats her around the ring. Mel seems really green. Shida hits a sloppy hurricanrana and sends Mel from the ring, where Statlander completely misses her with a hurricanrana. Shida then uses a chair to run off and deliver a knee to Mel.

Back in the ring, Shida gets caught with a big boot after a distraction from Brandi, who then tags in. Brandi kicks Shida around the ring before choking her in the corner. The referee gets distracted with Statlander, so Mel runs in and helps Brandi beat Shida. Brandi then leaves to the apron, as though she tagged Mel. Someone really needs to provide AEW with a basic rule book.

Back live and Mel is beating on Shida. Hikaru makes a comeback and tags Statlander, as Mel tags Brandi. Statlander drops Brandi with a headkick, then another kick, and a spinning tiger driver for Mel breaks the pin attempt.

Shida takes to the top rope and hits a sloppy dropkick to Mel that knocks her to the outside. Mel grabs Shida and throws her into the barricade. Meanwhile Brandi slams Statlander for a two-count and gets angry. Tag made to Mel, who hits a spin-out sidewalk slam for a near-fall. Statlander and Shida double-team Mel for a near-fall. Shida knocks Brandi from the apron but Mel knocks both of them down with a clothesline. Statlander counters Mel and hits a Big Bang Theory for the win.

We get a promo video for The Dark Order, in which they have a slideshow of potential new recruits, including Hangman Page. They say they want to show The Elite, that they are not as powerful as them.