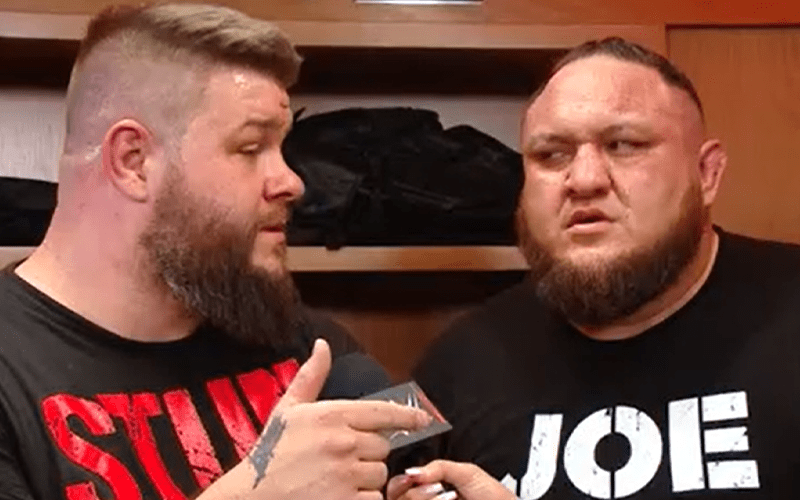 Kevin Owens and Samoa Joe are now paired up on WWE television. The two make a fine team, especially with The Big Show. Owens and Joe have a much longer history together than just a few weeks.

While appearing on WWE The Bump, Kevin Owens discussed his history with Samoa Joe. They knew each other early in their respective careers. Owens was the top guy in Quebec and Joe was ROH Champion. When those two finally met in the ring Kevin Owens said it changed his career.

“Joe’s meant a lot to my career because he’s the first one that I wrestled who kinda — so it’s a whole thing to get into, but when I first started wrestling I wrestled in Quebec. They’re closed off like an island on its own in the wrestling world at the time, and it kinda still is that way. Not a whole lot of guys make it out of Quebec to wrestle in the US and nobody in the US really came to wrestle there.”

“There was a company that doesn’t exist any more called Elite Wrestling Revolution, but they would have shows in Quebec City. They decided to bring in people for the first time independent stars from the US and once they did that everyone else followed suit and once they did that I got to wrestle all those guys first because at the time I was viewed as a top guy in Quebec at that time. So, I got to wrestle guys like Christopher Daniels and Steve Corino and Jerry Lynn.”

“Samoa Joe was Ring Of Honor Champion at the time, but I wasn’t really familiar with the independent scene because I watched WWE and that was about it. I knew [Joe] was champion and that’s about it and my friend made me a tape with all of his matches and obviously I could see he’s a very physical wrestler, but at that time that part of the industry had never really been opened up to me because of who trained me and how I was trained it just wasn’t something I was familiar with.”

“I knew what people expected with this match with Joe. Going into the match I guess I knew what to expect, but man… I don’t know if some people have seen the footage it’s out there online.”

“He was ruthless. I tried to hold my own against him, but at the time I had no idea that the wrestling industry could be that way. Dude, it was just… to put it mildly he beat the sh*t out of me.”

“It was eye-opening because I didn’t know at the time — I guess it was a rite of passage in that because right after that I started wrestling in the independent scene where I met a lot more people like him. I think that was a big part of the US independent scene at the time and the physicality was heavily influenced from the Japanese wrestling promotions and things like that.”

Kevin Owens went on to say that facing Samoa Joe was “instrumental in making me who I am today.” After he faced Joe, Owens knew he had to step it up with the physicality “or else I’m gonna sink out there.”

You can watch that match Kevin Owens was talking about below.