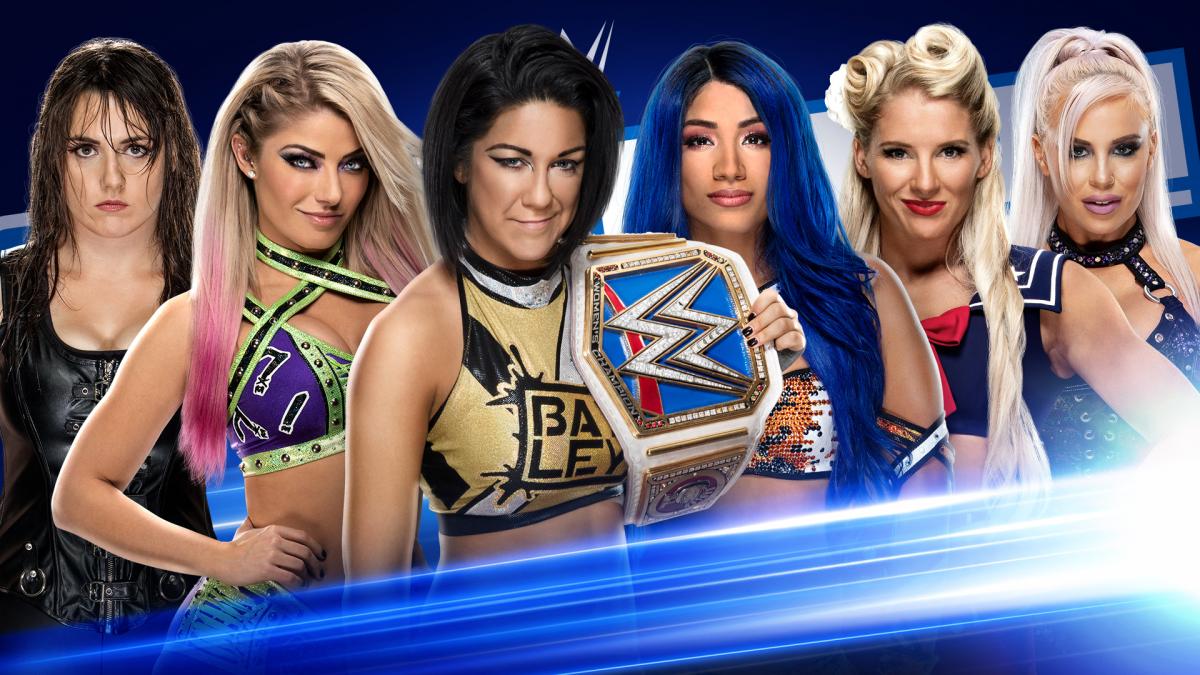 The blue brand continues into 2020 and we only have two matches booked for the show tonight. They will certainly have more in store as WWE continues on toward the Royal Rumble on January 26th.

Daniel Bryan and Roman Reigns will team up to face King Corbin and Dolph Ziggler. Let’s see if they involve dog food in the match at all.

We’ll have to see what else they have in store. It would be a good idea to kick off 2020 with a bang. Given the fact that a certain Superstar has been spotted in the area we could get a very big return tonight.

Daniel Bryan was backstage and The Miz walked up. He said the Fiend violated his daughter’s bedroom. He still wants to face Wyatt. Until The Miz figures out what he’s gonna do next he told Daniel Bryan to defeat the Fiend at the Royal Rumble “for everyone.”

Bayley said we all made it to 2020. She dragged people for chasing their dreams with New Year’s Resolutions. Nobody is following through with any of that. She said nobody in the crowd has what it takes to make any positive changes in their pathetic lives.

Bayley said that her and Banks are the leaders of the SmackDown locker room. She name dropped Lacey Evans and her name got a pop.

Evans came out and her entire entrance is now red white and blue like an American flag. Nice babyface touch. She cut a promo about building a new life for her daughter and how they used a seven year old to get to her. It is her new year’s resolution to show everyone that the bad guys can be stopped regardless of the cards stacked against you.

Alexa Bliss and Nikki Cross came out next. Alexa Bliss was sick, but she was out there. Bliss wanted to know if they even wanted to be in this match. Cross said they do to get those titles again.

Evans and Banks started out. Sasha ran from Lacey and then she tagged in Nikki Cross. They traded roll up pin fall attempts. Brooke took the tag and then Bliss came in as the two worked a little before Bayley dragged Brooke out of the ring.

Banks came in and then Bayley got a blind tag. Bayley knocked Bliss off the top rope and Banks hit the running double knees in the corner. Banks kicked Bliss in the head and Bayley got a nearfall before tagging Banks back in to latch on a headlock.

Bliss fought back and Banks took Cross off the apron. Then Bliss hit a jaw jacker and Bayley took out Brooke off the apron before Banks took Evans down. Nikki nailed everyone with a dive off the top to the outside before getting sent into the ring steps by Banks.

When we came back from commercial, Brooke was the legal woman with Banks. Bliss broke up a pinfall and then Banks and Bayley double teamed Brooke in the corner for a two count.

Dana Brooke continued to sell Bayley mocked Evans in the corner. Banks threw some knees into Brooke after she took the tag, but Dana kicked out. They continued tagging in and out as they worked on Dana Brooke.

Bayley took Evans off the apron with a cheap shot and then Banks took the tag and got a near fall off a double team suplex. Brooke reversed a suplex into one of her own and she finally got to Evans in the corner.

Lacey Evans rallied on Bayley for a near fall and then she did the bit with her handkerchief and you could head someone whistle at her in the crowd. Banks pulled Bayley out of the way before she could hit the moonsault. Bayley hit a Bayley To Belly, but the pin was broken up by Bliss and Cross.

Evans reversed out of a double team move and then she hit a Women’s Right on Banks before Dana Brooke nailed a senton for the win.

Otis was lifting something heavy backstage and Mandy walked up. She asked him if his mother made anything special for the Holiday. He told her to ask Dolph Ziggler. His feelings were still hurt over that fruitcake from last week. He has a match next. Mandy looked like she felt back, but what can you do when Dolph Ziggler wants to step on a cake in his Jordans he’s gonna step on a cake in his Jordans. It doesn’t matter if Otis’ mama made that cake.

The Miz ran into the New Day who were celebrating with their pancakes that were shaped like “2020.” Big E said he watched the balls drop on New Year’s Eve. Kofi said there is only one ball and Big E wondered what the hell he watched. They were trying to get The Miz to be happy about what he has. The Miz wasn’t happy. He knocked their pancakes on the ground and Kofi said that The Fiend has Miz’s mind all scrambled. Then he said that he’s got him. So they’ll have a match tonight probably.

Elias played a little song about it being a new year and a new me. He wants to send Shane McMahon to RAW if he comes back. He threw shade at Dolph Ziggler’s standup comedy. Then he said King Corbin is like an STD he just won’t go away. He pointed to a guy in the crowd and said “this guy knows what I mean.” He said everyone will walk with him at the Royal Rumble. Take a bow, Elias.

The Revival were backstage and they’re sick of being the butt of all the bad jokes. They’ve worked way too hard to be treated like clowns. Shorty G walked in and said they shouldn’t let what anyone says bother them. He’s embraced who he is and it’s the best decision that he’s ever made. They called him the New Year’s Baby and asked him if his mommy and daddy let him stay up and watch the ball drop.

Shorty G said “it’s rise over size” and when you’re comfortable in your own skin you can do anything. Dash Wilder said Shorty can’t beat one of them in a match. Shorty wanted that match and Dash said it’s on.

Dawson got to sit in on commentary for this one. Shorty hit a nice throw and a suplex. Wilder kept feeding him and then knocked Shorty on the top rope and hit a superplex.

Dash held Shorty down and G landed on his feet off a suplex. Shorty hit a backkick and tackled Dash to the outside. Then they made it back quickly where Shorty hit a bodyblock off the top for a two count.

They continued trading moved and Dash got trapped in an ankle lock and tapped out. Then Dawson attacked Shorty G after the match and there was a Shatter Machine.

Then Sheamus came back. He took out Shorty G instead of saving him.

Kofi Kingston vs The Miz

The Miz was very intense, but Kofi kept out wrestling him. Then Kofi hit a monkey flip that shot The Miz up so high he broke up and started laughing about it.

The Miz sent Kofi to the outside, but Kingston jumped in the ring to dive on Miz, but Miz walked off without letting Kofi dive. The Miz seemed to be wrestling as a heel again for this one. He’s determined to get to the Fiend.

Kofi missed a Trouble In Paradise and then The Miz landed kicks in the corner and a couple running knees. Kingston caught The Miz with a kick to the face and then he hit him with an ax handle off the top.

Kingston hit a Boom Drop and he missed a Trouble In Paradise again. Miz reserved tried to get a Skull Crushing Finale, but Kofi rolled him up for a pin and got the win.

After the match, The Miz attacked Kofi. Big E had to run in and The Miz walked off looking pissed. The Miz yelled at the crowd about everything he’s given them as they booed him.

Daniel Bryan and Roman Reigns are ready for their match tonight. Reigns said he’ll also be in the Royal Rumble. He wants that title back after never really losing it. He said it’ll be him and Bryan at Mania. They’ll focus on tonight first.

Cathy Kelley tried to get a word with The Miz and John Morrison was in the dressing room instead. He said The Miz needs to deal with things and he can’t talk right now.