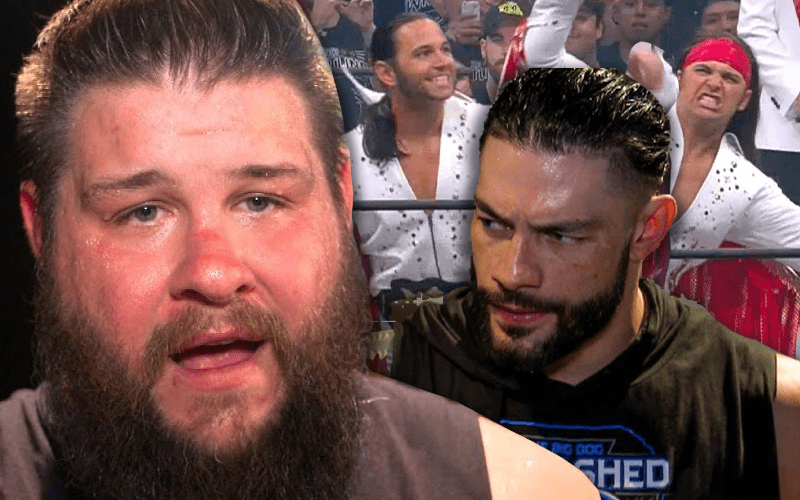 Kevin Owens is quite active on social media and he likes to have some fun every now and then. He also doesn’t appreciate it when people use the platform to throw shade.

The Young Bucks have left Twitter because it is often a very negative place. While speaking to Booker T’s Hall Of Fame Podcast, Kevin Owens explained how he sees social media. You don’t have to be saying something explicitly about him in order to get blocked.

“I used to be a huge social media guy. It helped me make a bit of a name for myself while on the independents… But when I came to WWE – obviously they give you a bigger platform than the indies – so you have a lot more people with access to you and people who know you. Quite frankly, a lot of those people aren’t good people. Through the years I’ve experienced my share of crappy things said about me – you can talk about me and I won’t bat an eyelash – but when they start going after kids, even not my kids…

“I get this everyday where I see people, ‘Oh, you blocked my friend on Twitter, why? He never said anything about you.’ I used to see people talk about other people that I care about and they would say really horrible things. I blocked those people as well because if that’s how they think about people I respect, then I don’t want them to follow me or have access to me.”

Kevin Owens said that he’s seen people say awful things about his friends and he just doesn’t want them looking at his timeline. He cited Roman Reigns and The Young Bucks specifically, but KO is a well-liked guy so there are likely many more people he doesn’t want to see dragged on Twitter.

“I’m like, ‘I don’t want these people to have access to me.’ It’s not just Roman as it’s so many people. The Young Bucks are friends of mine and I was tagged in a tweet where this guy was talking about he hopes The Young Bucks break their neck. Then you’re not a fan. It doesn’t matter if you don’t like them, to wish that on someone, I want no part of that,”

“That’s the kind of stuff that has driven me from social media. I still use it once in a while and I like posting about my family. But I try to keep wrestling out of it because I don’t enjoy that part of it. Everybody’s got an opinion and everybody thinks their opinion is important, but I don’t care for it in that way.”

Kevin Owens is going strong into 2020. He is stunning anyone in his way and a new alliance with Samoa Joe could be incredibly interesting. We’ll have to see what’s next for Owens, but if you want to keep following him on Twitter it might be a good idea to be nice to his friends.