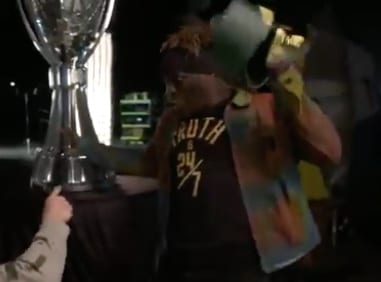 The insanity of the 24/7 Championship can be pretty fun from time to time, and it can also leave you scratching your head – and we think that WWE is probably okay with that being the title’s legacy, regardless of how long it lasts.

Last night on RAW we saw R-Truth lose the 24/7 Championship to NASCAR legend Kyle Busch, with Michael Waltrip standing by in order to serve as the special guest referee. In the end, though, it wasn’t a reign that wound up lasting particularly long.

Truth won the belt back with yet another roll-up backstage, with the title change being revealed on social media.

WWE tends to take themselves very seriously most of the time, to the point where fans almost believe they’re turning into a parody of themselves. Every so often, though, they learn to take a step back and have a bit of fun.

Busch is a great act to bring onto the show as he’s certainly got more charisma than you might expect. Plus, he’s a well-known face, which will hardly be a bad thing for WWE in the landscape of the mainstream media.

Truth, on the other hand, won the belt for the 24th time – and when you consider the name of the title, we think it’d be a giant missed opportunity if Truth didn’t just wind up holding onto the belt for a year or so now.

Perhaps one day we can see a serious title match for the strap, kind of like we did every so often with the Hardcore Championship.