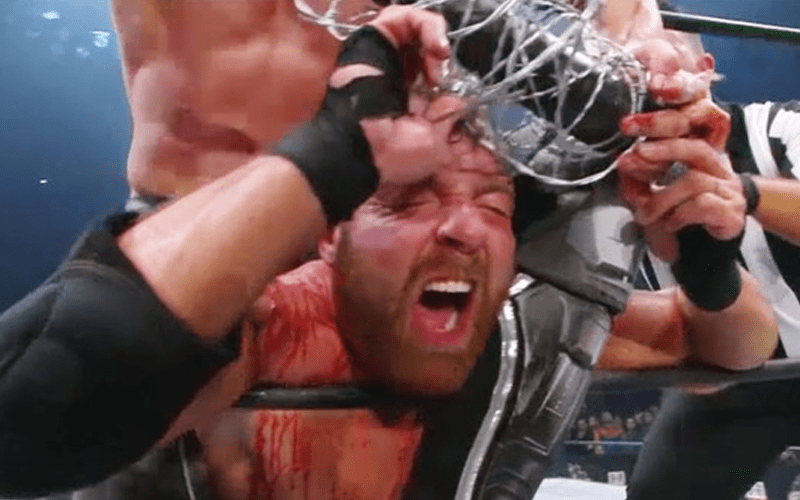 Jon Moxley and Kenny Omega tore each other to shreds in an unsanctioned match that closed out AEW Full Gear. Now Mox can look back and he is thrilled with what they were able to do.

Chris Van Vliet recently spoke to Jon Moxley where the former WWE Superstar explained that those crazy match concepts have been brought to him in AEW. He’s surprised by what he has been able to do as well and realizes that it’s not everyone’s cup of tea. That won’t stop him from from loving every moment of it.

“I am unapologetic of whatever you wanna call it, the death match style, the hardcore, whatever. I love that stuff. My favorite matches ever are big japan death matches. I understand that most people are gonna think that’s crap and they’re not gonna want to watch that.”

“I love that stuff, but there’s a reason why those promotions that do that stuff — even ECW — was kinda a niche promotion because a lot of people just get turned off by all the excessive gore and so forth.”

“Although I love that kind of stuff I wouldn’t force it on anyone else. It’s not like I walked into AEW and was like, ‘Look every match I have is gonna be crazy’ — this is being brought to me — I’m like, ‘We can do that? Really?'”

“Like I would have never imagined that we would be able to do stuff like that, but this scenario, he was stalking me for weeks with a barbed wire broom which I had never seen before. When we started this thing I threw him off a nearly fifteen foot stack of poker chips and nearly killed him so by the time we got to Full Gear we’re trying to kill each other.”

“You get too super creative guys, two artistic guys with no strings on them and you put them in a violent aesthetic… the match kinda took on a life of its own, you know?”

Renee Young was not happy about this match despite her husband’s excitement. Mox also said that Young “will get it though.” She knew what she was getting into when marrying someone like him.