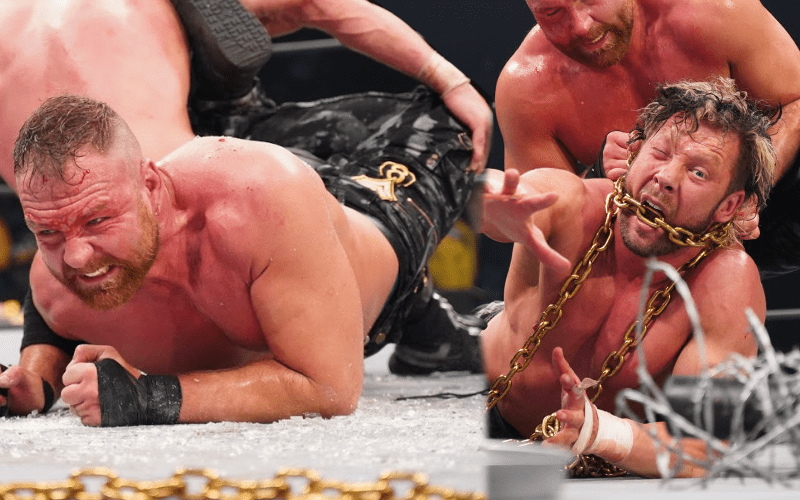 AEW pushed the envelope in a lot of ways when they allowed Jon Moxley to work the kind of unsanctioned match with Kenny Omega that they wanted. There were plenty of dangerous toys involved and a worry that this trend could continue in All Elite Wrestling.

While speaking to Wrestling Observer Radio, Kenny Omega addressed those who were critical of his lights out match at Full Gear. It wasn’t for everybody, but just like in music there will be fans of every style.

“Look, I’m a fan of heavy metal and rock music, but if someone out of nowhere played me you know, the most heavy death metal — something I’ve never seen or heard before it may not be my cup of tea right off the bat, but hey if I hear just how technical the guitars can be and how fast the drums can be it may be my cup of tea. I may say this is the craziest, coolest thing I’ve heard in my life, but to some people it just may sound like noise, I get it.

“That goes for any type of wrestling style. A lot of other people also don’t like my really long matches with Okada and I get it and that’s why when people ask me ‘What would you suggest as a match to show people of yours I would never say the hour draw [with Okada] I would never say the best of three falls because I know that’s way too much to digest in one sitting.”

“You know, different strokes for different folks and I don’t take offense either way, but I was thrilled to hear people say that’s one of the best hardcore matches I’ve ever seen, match of the year, some people said it’s their favorite match of all time — that’s awesome to get that kind of reaction from people. I’m really happy and I’m glad that I challenged this match style and again, now this isn’t a spoiler alert, but I won’t be doing it very often so yeah, I’m glad I did it. I don’t think I could have ever done it in New Japan and probably WWE if I went there. It was something that — yeah, so it was something really special to AEW and I’m glad that I was able to do it. So, I’m really proud of it.”

We’ll have to see how long it will be until All Elite Wrestling uses broken glass or a barbed wire spider web in one of their matches. The mouse trap board was a nice touch too.

Kenny Omega lived to tell the tale and he seems to be proud with what he was able to do with Jon Moxley in Baltimore. For that matter, a lot of fans really enjoyed it as well.