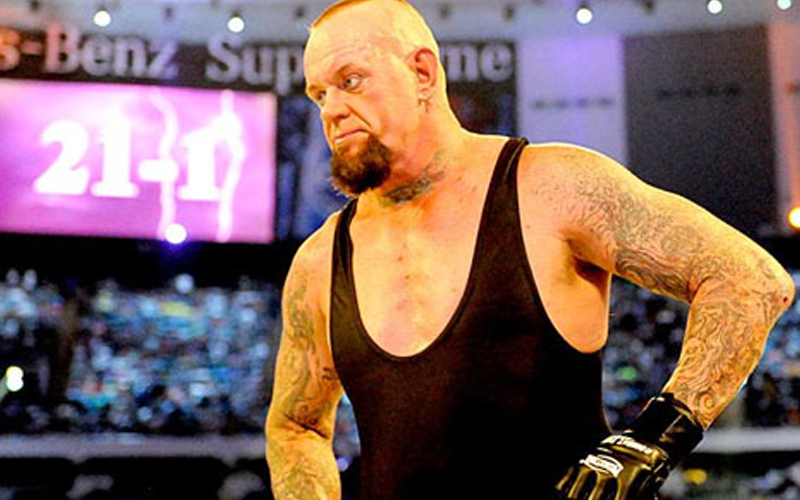 The Undertaker’s legendary WrestleMania winning streak continued until he stepped in the ring with Brock Lesnar at WrestleMania 30. Fans in New Orleans will never forget watching The Dead Man lose his first Mania match and it sucked so much life out of the Superdome that the crowd reaction for Daniel Bryan’s main event win suffered.

During the Broken Skull Sessions, The Undertaker explained that he was concussed during that match. In fact, he doesn’t even remember much of the day leading to his big WrestleMania loss. The next thing he remembers is that he couldn’t remember who he was.

“I guess that’s the million dollar question. I guess it could have been [the right time to retire]. The thing about this match that nobody knows is somewhere within the first five minutes of this match I get concussed. I don’t even remember this night.”

“I mean I’ve watched it back now. I obviously know. The last memory that I can definitively tell you happened at about 3:30 in the afternoon when my wife came backstage and we had a conversation. That’s the last thing that I remember on my own of that day.”

“At this point in my career there is a huge process of me getting ready. Between the stretching, visiting the doctors, doing everything that I have to do to get myself ready to go out and perform — it’s gone. When we’re talking about process we’re talking about an hour and a half, two hour process that’s just completely gone.”

“My memory picks up I wanna say 4:30 – 5:00 in the morning when I’m in the hospital and they’re coming to check on me every five minutes to ask for my name and I’ve got no clue.”

He has watched his WrestleMania 30 match back again, but he still can’t nail down when he suffered the concussion.

“It’s nothing Brock did, I think him not knowing that I was concussed and kept doing belly to back suplexes, but that’s not on him because I was still moving.”

Taker said that his WrestleMania loss screwed up his confidence. After a 25 plus year career he found himself shaken up, because “I couldn’t pinpoint where I was concussed.”

He was like a fighter in camp training for a fight, but he thinks his body wasn’t ready for the trauma so the simplest bump “rung my bell.” He was later told that his brain was like a lamp and “someone unplugged him.”

He eventually said that he’s not going out in his last match not remembering it. This is one of the contributing factors to why The Undertaker continued wrestling past his legendary streak ending.