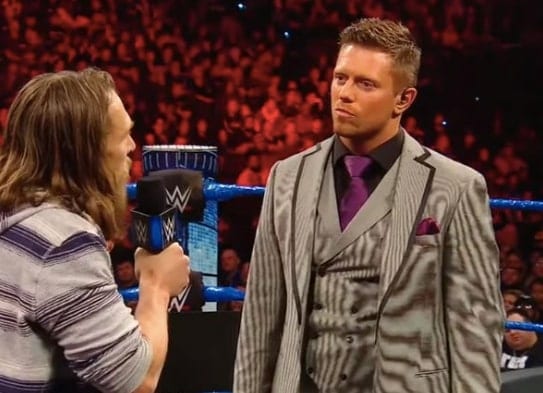 Being in the midst of the WWE Universe can often be quite taxing, with the entire fanbase taking itself pretty seriously most of the time. As a result, sometimes, it’s better to take a step back and look at the softer side of the business.

The final segment on Friday Night SmackDown last week was a great back and forth between The Miz, Daniel Bryan and ‘The Fiend’ Bray Wyatt, with Bryan proving once and for all why he’s one of the best talkers in the game – alongside the other two men involved in the segment.

Alas, prior to coming out, Miz probably should’ve given some thought to the suit that he was going to wear.

Plenty of viewers noted that the choice of attire from The Awesome One was messing with their TV, but given how Miz operates, we wouldn’t be surprised if he was planning that the entire time.

In terms of Miz himself, we tend to believe that he needs to break out of this current role he finds himself in. While he’s a great host of Miz TV, he has the potential to go on and do some much bigger things in WWE.

He’s a former WWE champion for a reason and while not everyone is going to be in favour of him winning the title again, he should certainly be challenging for it. Who knows, perhaps he’ll insert himself into this feud between Wyatt and Bryan over the course of the next few weeks.