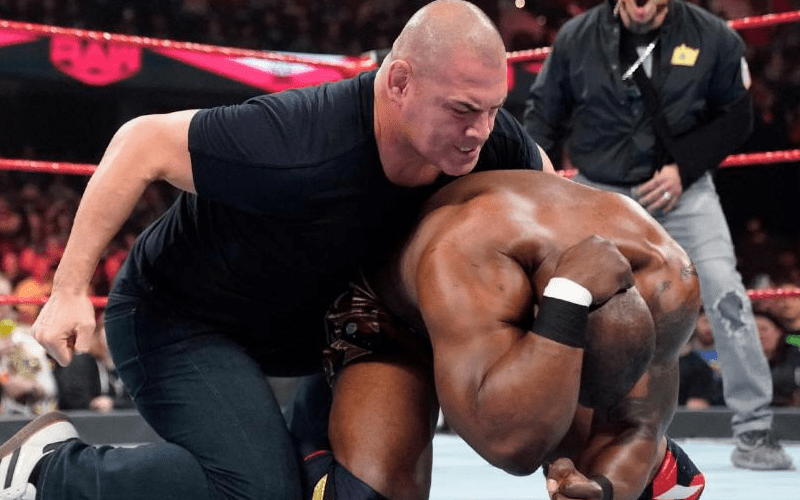 Cain Velasquez signed a three year deal with WWE so Crown Jewel won’t be his last match. He is set to face Brock Lesnar for the WWE Title this Thursday and he seems focused to take another title from the Beast Incarnate.

While speaking to Not Sam Wrestling, Cain Velasquez was asked about what it was like to get physical for the first time in a WWE ring. He roughed up Shelton Benjamin last week on RAW and brought his MMA influence to WWE for the first time.

Velasquez said it was a great experience to take Shelty to the woodshed, but it’s all preparation for Brock Lesnar in Saudi Arabia.

“It was great, a great learning experience. You know being with Rey and working out with Rey. You know he can definitely can take care of his own, but now it’s like he’s in a sling right now and Shelton Benjamin trying to take advantage of him, like that’s not cool, you know what I mean?”

“So to go out there and teach him a lesson was great. It’s all preparation for the task at hand and that’s beating Brock.”

When it comes to that “little voice” telling Cain Velasquez to stop when his opponent has had enough, Rey Mysterio is there for that role. Mysterio said “Shelton got lucky” before Velasquez’s cage fighter mentality took over.

Cain Velasquez very well could come back to America as WWE Champion after Crown Jewel. It is interesting that their match was not for the title at first, but once Cain Velasquez signed a longer deal that changed.