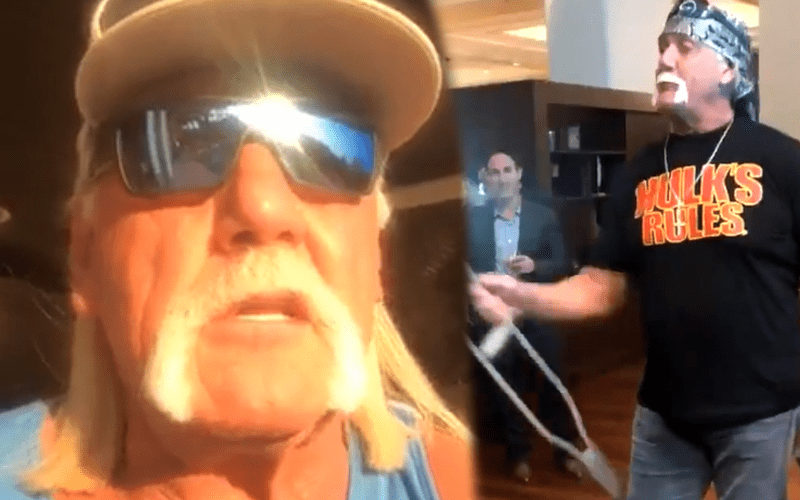 Hulk Hogan made a headline yesterday that he didn’t want to make. He had an altercation with a fan and the clip has since gone viral.

During this confrontation, Hogan said something about being with this guy’s wife as an insult to him. Now Hogan is explaining himself and what happened in this event since we only saw what was recorded at the time.

He said that Nick said he should do this video in character, but The Hulkster decided to just explain it as himself. Then he told “the exact truth” about what happened.

He said that after SmackDown, Ric Flair invited him to the bar for one drink. There are plenty of crazy stories that start just like that.

Ric Flair promised Hogan that the bar was calm and nobody would mess with them. When Hulk Hogan came down, people started paying attention. He said they got out their phones and wanted pictures. Flair tried to “play a heel” and run people off, but then they had an issue.

There was a fan who was obviously drunk and he had a few friends with him. Ric Flair got rid of them, but then this fan bought them Shirley Temple drinks as a joke.

Flair left and then Hogan started to leave. Then the drunk fan yelled “hey Hogan, you’re a f*cking dick!” That is what caused the altercation and this is when the video started filming.

Hogan said that Flair was the one who came up with the line saying: “the last time I had a Shirley Temple I was with your wife,” but he said it at the table. Then Hogan used that line against this drunk fan to his own face.

Obviously, things didn’t get physical. This was definitely a situation that could have been avoided if a drunk fan would have understood that Flair and Hogan wanted some time to chill and not be bothered.