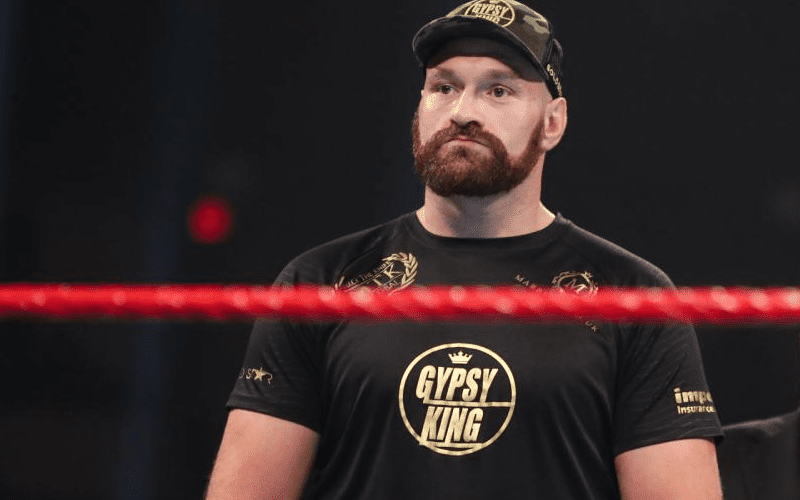 Tyson Fury is making a lot of money to work WWE Crown Jewel, but his boxing promoter isn’t very happy about it at all.

Frank Warren has already come out and spoken about Fury’s involvement with WWE. There is also a worry that an accident in the ring could risk a future boxing match in February 2020.

While speaking to the Ariel Helwani Show, Tyson Fury admitted that he didn’t tell Warren about his dealings with WWE. In fact, he wanted it to be a surprise and now his boxing promoter is quite pissed about it.

“I didn’t [give Frank Warren a heads up about me competing in WWE] because I wanted it to be a big surprise! He was mad, he was quite pissed to be fair. He said to me, ‘I think this is a really bad idea, you could get injured; Braun Strowman is a massive guy. What happens if the cut re-opens? What happens if you get injured shoulders, or legs, or whatever?’ And I said, ‘Well, this is a risk that – what happens if I go out the front door and get run over by a bus in the morning? If we lived our lives on what if, we would never do anything in our lives. You’ve got to take the bull by the horns and get on with it and enjoy it because like I said, these are once in a lifetime opportunities.”

“I’m sat here with one of my childhood heroes. It’s surreal to me to go backstage and meet Hulk Hogan and all the rest of the guys – The Rock and everybody. It’s been a fantastic thing for me and it was an opportunity that I did not want to slip,” Tyson continued. “But Frank along with my management team, trainer, father, brothers, everybody was like, ‘Concentrate on your job. You are not a showman, you are not a movie star!’ I was like, ‘Try telling me that!'”

Tyson Fury wanted to work with WWE for years and now it’s finally happening. He wasn’t going to let something like his boxing promoter’s opinion stop him from fulfilling this life-long passion.