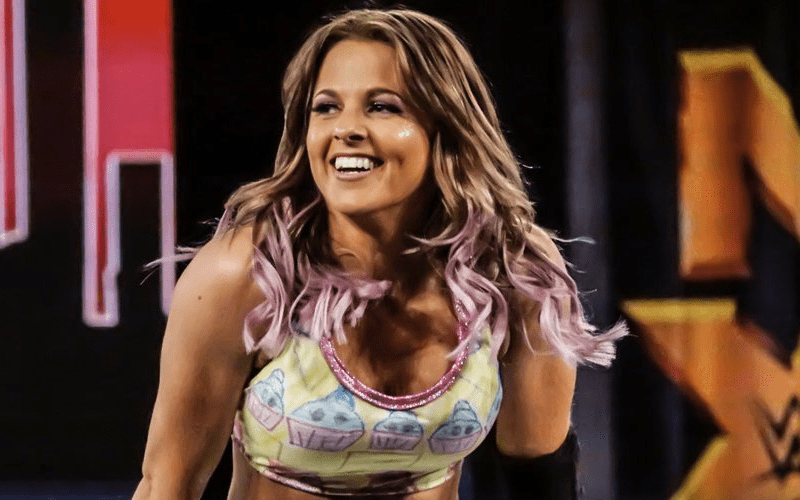 Candice LeRae was primarily involved in her husband Johnny Gargano’s storylines for a long time in WWE’s NXT brand, but now she is making a name on her own.

Before coming to WWE, LeRae was known as 1/2 of the World’s Cutest Tag Team with Joey Ryan. She was famous for a bloody PWG match versus the Young Bucks, and she impressed and inspired so many wrestling fans along the way. Upon signing with NXT, it seemed like her momentum stalled.

LeRae recently spoke to Newsweek where she revealed that she sacrificed who she is too many times when first coming to NXT. This is something that she will never do again.

“When I got [to NXT] I felt I was sacrificing who I was for no rhyme or reason. I think then I was being insecure. The match with Io forced me to deliver and be myself. And now I feel like I’m wrestling like I always had before coming here. And now I’m able to give fans the me I’ve always been and should never sacrifice that again, because I want people to see the me that they liked before me getting here, and I want the people who don’t know who I am to see that version of me too because that’s who I truly am. I want them to feel the love for wrestling that I feel.”

“I think I just hadn’t been myself when I got here. I didn’t feel confident in anything I was doing basically, [laughs] so when I’m not confident in it, I’m like “do I want to spring off the ropes and flip on somebody? Or do i want to fly in the ring and crash and burn?” The thing is, a lot of the things I do are so risky. The willingness to risk my body for these matches is what I sacrificed the most. And it’s not the fans fault. It’s just I felt insecure with what I was doing, and I was fearful to do it. And now I’m like, ‘you know what, if I’m not going to give it my all and do me, then what am I doing?’”

Candice LeRae is focused and ready to become NXT Women’s Champion. She might not have been able to pull down the big win in her first attempt, but she’s not going to stop aiming at the top. Perhaps, her hard work and determination will eventually see her topple Shayna Baszler or whoever might be in her way.